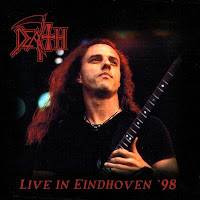 Live in Eindhoven was released only a few weeks after Live in L.A. (Death & Raw), so presumably this was also used to generate some funds for Chuck's ongoing struggle with cancer. There is a DVD for this also (I believe one for its predecessor too), so I will immediately recommend that everyone interested just focus in on that and skip the audio only release, since there is just not much value to it coming so close after the other release. Still, if you were all for funneling the money to the ailing musical legend, it would be something purchased sight unseen strictly for the assistance it was providing. Hell, even if Nuclear Blast wasn't giving him a large share of the proceeds, he was at least getting the usual percentage and royalties, right?

The problem is that this Dynamo Open Air gig has the same lineup and same general track list as found on Live in L.A. (Death & Raw). The difference is that "Lack of Comprehension" and "Flattening of Emotions" have been included, and the following removed for the shorter set: "Zombie Ritual", "Scavenger of Human Sorrow", "Empty Words", and the title track from Symbolic. It's not much of a better set, though they fuck around with the finale "Pull the Plug" less than the other live album, and I felt that the sound quality here was evenly balanced, if still pretty raw and lacking. The vocals are a tad less grating, the guitars and drums better mixed, and I can hear the bass lines better even when the dual axes are sounding off. In all, I felt a fraction of more potent excitement than I did listening through the other, but I have to question its overall use when we'd just been bombarded with such a similar product.

What would have been excellent would have been if the band and labels had dug through the band's history and given us a CLASSIC live album from the Ultimate Revenge 2 years, or an earlier tour. Surely there were a wealth of bootlegs and soundboard recordings to cull from? Now that would have been something, offering the fans two choices: a modern lineup and an old school rendering. I would have plunked the money down on that instantaneously, and I'm sure others would have appreciated the same. In the end though, this is just another release you're going to snatch up to support the artist as opposed to expecting much throughput of the content, and in this case it's safer just to grab the DVD so you're getting the video component.