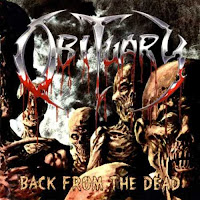 Obituary's 90s predilection towards groove metal and hardcore reached its peak with their 5th full-length album in 1997. One must ignore the zombie strewn cover image and the bold, blood-dripping chrome of their masterful logo, because grisly and gory this is not. Really, calling it Back from the Dead was a bit of a misnomer, as this is no rallied return to the form of their career best (Slowly We Rot, Cause of Death) and in fact the band would dissolve into a hiatus for the following 5-6 years. More accurately, it's a natural extension of where the Floridians were headed with World Demise, only more palpably accessible to audiences outside the death metal sphere. In fact, the band has gone so far as to invite a pair of rappers for a remix of one of the new originals.

One instantly realizes just how tangible the hardcore/punk influence is once "Threatening Skies" launches into its emotional fast break. Really, this is almost straight up NYHC, and it would take only a slight moderation of John Tardy's presence for this to transform into a Sick of It All tune. That said, the song is probably the catchiest of the entire release, and Tardy's ghastly torn throat fits the mold with uncanny precision. There's another nice punk/death metal solo break in "Download" which deserves mention, but this is probably the limit of the straight core appeal. Beyond these, there are a number of tracks which successful develop a pedestrian groove reminiscent of something the band would have written between 1990-1994. "Platonic Disease" and "By the Light" are the best examples, with concrete hooks that are not at all unpleasant due to the thick production, bred for the moshing audience but certainly reflective of the band's huge Celtic Frost/Hellhammer influence. There are also a few half-baked grooves elsewhere, in "Feed on the Weak" and "Inverted", but neither is quite that consistent.

Then, of course, we have "Bullituary", an abomination of "By the Light" which features a pair of would be hip hop mavens known as 'The Bully Boys': Skinner T. and Diablo D. (try not to blow whatever you're drinking out your nose and ears). The two perform in a tough guy style not unlike Onyx, Geto Boys and the Boo-Ya Tribe, but like much of that mid 90s rapcore crossover, it's got no value beyond the riotous irony of its construction. There have been worse lyricists within the genre, and there's an interesting contrast when some of Tardy's original vox echo beyond the hip-hop verses into the Biohazard style gang shout sequence, but you don't need me to tell you that this is ultimately LAME. I reiterate what I've said in the past: it's not because there isn't potential for a band to come along and mesh rap and metal elements into a quality whole. It's that NO ONE had the tact and ability to do such. Thus we wound up with awkward, diminishing returns as the 90s progressed, and then the mighty fallout and ensuing mockery that humanity has thrust upon the majority of these mutants.

Granted, "Bullituary" was considered a bonus track for shits and giggles by the band, and it does sound like all involved had some fun with it, but the taint remains, further poisoning what is otherwise not a great album to begin with. Some credit is due here, because the production of the album is quite nice, John's growling cutting through the guitars wonderfully. Back from the Dead is far from the worst Obituary album, because despite the mash up of styles the band explored within, it's still more exciting than the enormously dull architecture of The End Complete or the pathetic comeback Frozen in Time, but it was not enough to contend with the yawning expanse of mediocrity that had plagued the band since their excellent sophomore album in 1990.