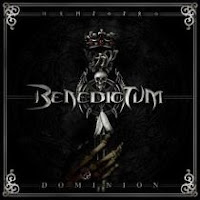 San Diego's Benedictum are a pretty hard band to place, not only because they persist upon a broad plain of stylistic deviations, from straight power and thrash metal to lots of modern groove, but also because they have one of the most unique vocalists in the genre. Veronica Freeman is one of the few metallic personalities that seems able to transcend the very concept of gender in her vocals. Not only can she sing with the formidable melodic edge of a forebear like Chastain's Leather Leone, but she can also bark out a manly angst akin to Arizonan thrashers like Phil Rind of Sacred Reich or a pissed off Erik AK of Flotsam & Jetsam. What's more, she'll accent herself with various growls, snarls and even a more delicate, feminine tone when the opportunity presents itself...

It really must be heard to be believed, but unfortunately I feel like it often feels too dominant a force to pay much attention to the music. Now, Freeman is not the only distinct individual in this band. The rhythm section is diverse and hard-hitting, and guitarist Pete Wells can shred along the best of them, explosive leads often becoming a tangible pleasure when they erupt from the sadly mundane rhythms. Benedictum have a very 'modern' appeal to them, that is a clean production style redolent of pop or radio rock, but this all too often manifests in grooves and cheesy squeals that I find pretty boring ("Dominion", "Grind It", "At the Gates"). Also, there is almost too much variation in the songwriting, so you'll get something stupid and bouncy like "Bang" run up against a cheesy, Lita Ford-esque power rock ballad like "Loud Silence" and then a proggish metal piece like "Epsilon", all in a row...

The lyrics are also confusing. Benedictum offer some pretty inspirational, verbiose prose in the majority of the material, but then they also have "Bang" or "Grind It" which are a little cliche and silly, at least how they come off above the music. That said, these Californians often know how to write a damned chorus: "Seer" and "The Shadowlands" show a lot of depth and planning, with Freeman counterpointing herself like a pro. The solos are almost unanimously sweet, even in the instrumental "Beautiful Pain", where Wells proves himself one part Eric Johnson and several parts Malmsteen. Much of the writing will be well suited to fans of modern metal albums strong on vocals, for example Halford's Resurrection or the Bruce Dickinson solos. I found myself absorbed in a handful of tracks, but turning my nose up at others, so in the end I can't say I enjoyed the album nearly as much as its predecessor Seasons of Tragedy (more of a straight up ass kicking there). But at the very least, the album is appreciably unique. For better or worse, you will not hear something like this every day. But then, you might not want to.