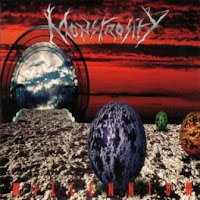 It's a shame that Millenium is such a godawful eyesore of a thing, because the level of acrobatic elegance on display here is enough to send pacemakers spiraling out of function and the rest of us back to musical school to figure out what's wrong with us, why our limbs cannot move in such frenzied configurations. That's not to say it is necessarily the band's peak performance, as it sacrifices a bit of the focused old school intensity of Imperial Doom for a more technical, flashy interface, but it's very much worth checking out if you're a fan of the more proficient Cannibal Corpse records with George Corpsegrinder at the helm (think of it as the spiritual precursor to Bloodthirst or KILL, only with more inherent velocity).

Certainly, this has the highest ratio of intensity throughout the surviving Monstrosity catalog, almost as if you took the spastic thrash of Vio-Lence or other Bay Area staples and placed it in a grislier context with guttural vocals. Songs like "Fatal Millenium" and "Manic" are loaded with eye popping rhythms, the former being my singular favorite song from this band, an accelerated storm of quality tech death riffs intent on leaving the remainder of the death metal universe in the dust. Despite this impulse, the track is surprisingly varied, slowing to mid-pace for a few concrete crushers, like wading through a violent storm to finally find the eye. "Devious Instinct" is another memorable piece with crazy drums and trills not unlike something off The Bleeding, only far faster. Other psychotic extractions include "Mirrors of Reason", "Manipulation Strain", and "Stormwinds".

Not all that glitters is gold here. Where Monstrosity decide to slow the pace to a steady mosh crawl ("Fragments of Resolution"), they come up a little short in quality. Others, like "Dream Messiah" and "Seize of Change" each have worthwhile thrashing bridges, but little else of note. I was on the fence with "Slaves & Masters", a decent technical exercise with a bridge not unlike Bolt Thrower. There's a lot of traffic happening in the guitar department, crisp and punchy, and Jason Morgan has turned in quite a performance, but not all of the vehicles make it to their destinations. Fisher gives an adequate, percussive dimension to the music, but often his presence becomes monotonous and all is left up to the guitars and drums to entertain. Scott Burns draws out a lot of clarity from the instruments, essential when so much is happening, even if is not a lot of charisma to the mix.

That said, this is a strong sophomore, certainly with more proficiency than Imperial Doom if not the same lasting impact. The lyrics are good, even if the cover is ugly as sin (gotta love the formative years of computer graphical misery). Millenium is not as powerful as some of the amazing records George would front when joining Cannibal Corpse (Gallery of Bleeding, Bloodthirst, Evisceration Plague, etc), and coincidentally this was his last album with Monstrosity before jumping ship for gorier pastures; but I'd recommend this to fans of the burgeoning, technical death outbreaks of the 90s like Suffocation and Crytopsy, or those seeking the rampant, viral speed of Morbid Angel.