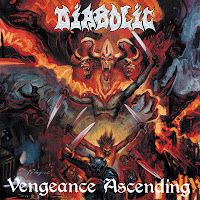 Counter to its feeling 'rushed', Vengeance Ascending was actually the proper Diabolic album of 2001, being released only a few weeks after Subterraneal Magnitude had finally arrived (due to delays). That can't be fun for any band, because which do you promote? Well, if I had been Aantar Coates and company, I would have just run with the sophomore, because Vengeance Ascending is one of those 'rush to the finish line' albums which gestates pure speed and brutality, but not much by way of interesting riffs or compelling songwriting. In fact, the one saving grace this album might possess would be the leads, as in "All Evils Inside", which provide about the only tangible journey up and above the monotonous blasting and double bass.

Certainly, the drums are a lot more incessant than the previous two albums, but there's just not that much else happening to distract your ear away from them. "Darken the Imagination" opens as if it were a long lost runoff from Altars of Madness, sans the quality riffing of Azagthoth, and then it bursts through the next 3-4 songs as if some hellish premature ejaculation. The rhythm guitars are functional enough, yet they never quite achieve the mesmerizing patterns necessary to conjure any real malevolence. In fact, if you were to remove the samples, the album would be a total bore up until the bridge/lead sequence in "Marked for Banishment", which is followed with a dark ambient trip called "The Inevitable", through which the listener can take a break before the tightly coiled thrashing that inaugurates "Possess the Strength". But the remainder of the cuts follow the same mired formula of blasted mediocrity, half-decent dynamics and solos thrust into the compositions too sparsely, like oasis of memory in a desert of forgetfulness.

The mix of the album is also less impressive than Subterraneal Magnitude, because it's just so level that nothing other than the leads ever stands out to the fore. They're still using a similar guitar tone to the previous albums, but it feels less potent somehow, failing to distinguish itself from Coates' abyssal battery. The lyrics also felt a little less interesting than the two before, even if its skirting about the same occult pageantry. Diabolic seemed to be going for an all out death race of aggression which would impress those rabble who care for nothing else than sheer wall of force metal with zero immortal qualities, or at the very least a Morbid Angel knockoff, but they wound up with an album that has no real character beyond its barbarian forcefulness and a few spidery, resonant leads.