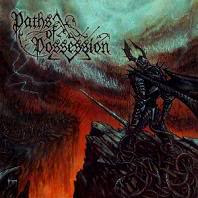 Really, it was inevitable. A Florida death metal act to draw influence from the more melodic treatment being given the genre at large. To their credit, Paths of Possession do not approach their writing with the diminishing returns of all the At the Gates and In Flames wannabes, but as more of a halfway point between the local death metal of a band like Death, Massacre or Six Feet Under with a dose of traditional 80s metal and some cursory grooving material which is sadly the bane of this debut album's existence. Legacy in Ashes is before the band acquired the presence of Cannibal Corpse (and ex-Monstrosity) front man George 'Corpsegrinder' Fisher, and the vocalist here sounds more like a lower pitched Chuck Schuldiner or John Tardy.

He's not really the problem, though. The issue with Legacy in Ashes is that, while a mix of heavy and death metal is a pretty good idea, one that in superior hands has seen mild success, Paths of Possession don't really do anything compelling with the hybrid, at least not on the debut. A few of the tracks like "Darklands" and "Army of Death" have surging melodies gliding across the loud and plunk bass tone and double-bass infused drums, but the majority of them represent nothing more than half-assed groove/death metal anthems that you could find in any 90s nu metal or bar-core band. "Cold Vengeance" is one such sucker, a song so pathetic in its bouncing banality that I can't believe the band included it here. Or "The Dawn Brings War", which is more redolent of Obituary at their most mundane. Others try to straddle the space between these two poles, like "The Sword Coming" and its glorious but weak melodies, but on the whole the album just never distinguishes the band's ideas beyond their roots.

The production is workmanlike and balanced enough, with the guitars having a nice crunch to them, but there is just no fire in the writing, and the best thing about Legacy in Ashes is the cover art. It's almost a pity, because this was at one point the new vehicle for ex-Morbid Angel axe-slinger Richard Brunelle. Had Paths of Possession pulled this off, they might have served as a welcome contrast to their local peers, who were mostly engaged in releasing mediocre or downright weak albums in the 21st century. Granted, this is before Corpsegrinder entered the picture, and the deal with Metal Blade, but then I wonder how either party's curiosity had been engaged by such a wimpy and indistinct debut such as this? A real 'first and worst' here.