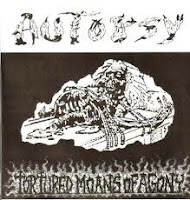 One of the earlier recordings through Necroharmonic Productions, Autopsy's Tortured Moans of Agony was a double 7" inch release that gave most of the interested populace their first experience with the California scumbags in the live setting. Well, at least if they could actually find this, or cared about a posthumous limited vinyl in the 90s. Taken from a 1993 live gig at Bonnies Roxx in New Jersey, it's only got about eight songs, divided pretty evenly across their back catalog, but despite the muddled sound quality and the inclusion of a few less desired stinkers in the track list, it's honestly not all that bad if you're a fiend for limited press gems.

Of course, this was recorded before the truly lacking Shitfun hit the market, so thankfully only one track from that album ("Shit Eater") winds up here, just as boring as the studio incarnation. But otherwise, they cover a lot of their classics, namely the godless tumult of "Charred Remains" (Severed Survival); and a worthy quintent from their excellent sophomore Mental Funeral, consisting of "Twisted Mass of Burnt Decay", "Fleshcrawl/Torn from the Womb", "Dead" and "Slaughterday", the last of which is my single favorite here, delivering a grisly and doomed depth despite the clamor of the relatively poor recording quality. Rounding out the selection is "Death Twitch" from Acts of the Unspeakable, and "Fiend for Blood" from the mediocre EP of the same name. The former is appropriately abominable and disgusting, the latter gone in about 30 seconds, before the eerie, rushed melodies can probe any reaction from the audience.

It's important to note that this is not the entire set of the performance, so Tortured Moans of Agony feels a bit half-assed other than something to foist upon collectors. This is sort of an official bootleg. If you're interested, Necroharmonic would later release the Dead as Fuck comp which contains the entire gig as well as the earlier Live from the Grave bootleg in one package. I'd advise any party interested in the music to pick that up instead, but ultimately I can't say that the consistency of the recording holds up to scrutiny. Too much thundering tripe in the mix, and nothing I'd actively seek out when the studio incarnations are so massively superior.