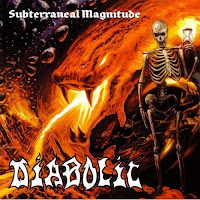 Though the album was delayed for a year, finally arriving just a short span before Diabolic's third full-length Vengeance Ascending was ready for liftoff, I am happy we were finally able to get our mitts on Subterraneal Magnitude. It's the best of this Florida band's efforts by a fair margin, combing the depths of those old school aesthetics unearthed by the band's forebears, but at the same time establishing them as more than a mere clone (at least here). This was their peak in both tone and mood. Reasonably strong songwriting compounded by rhythmic variation, dense atmosphere and entertaining, engaging lead work that succeeds in grasping the listener's attention when and where it might seem to begin to drift off...

I'd situate Subterraneal Magnitude between the poles of Morbid Angel and Pennsylvanians Incantation, though the former clearly remains Diabolic's most obvious influence (always would be). Tracks like "Infernalism", "Deadly Deception" and the superior "Failed Extraction" make strong use of Aantar Coates' musculature as the guitarists lay out storming frameworks of turmoil and strife, Paul Oulette's cavernous, deeper David Vincent tone presiding across the onslaught without stealing the mix away from the impenetrable rhythm section. But the album is even more interesting when the band slows itself to a raucous stomp, as in the intro instrumental "Vassago" where a catchy piano succumbs to copious grooves; "Fleshcraft", in which a simplistic and instantly sticking guitar pattern grinds off into the most potent and hellish thundering of the entire album; or the closing title track, which too manifests a climactic groove before thrusting off into the band's comfort zone of blasted, primal torment and tense solos.

All of this and a fine, throbbing production make for a band's early peaking. One wonders how this was not released on time. That added initiative might have allowed for it to cause larger ripples than it did among those craving brutal roots death among the hordes of more melodic acts that were taking flight around the turn of the century. Nowhere close to immortality, or perfection. But the decent lyrics, eye catching cover art and generally powerful composition (a few of the faster blasters leave something to be desired) drive this beyond their debut Supreme Evil and the following Vengeance Ascending with ease, not that the writing is all that distinct from one to the next, but Subterraneal Magnitude curries their Diabolic potential like a Beelzebub stuck in celestial amber, a cataclysmic statement that might have disintegrated a broader host of witnesses had it been given the chance.