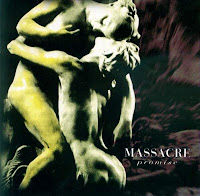 It would be misleading to qualify Massacre as ever belonging to the upper crust of Florida death metal, because despite the duration of their stay in the underground, they were little more than a facsimile of ideas manifest by better acts. Signed for their obvious affiliations and the frenzied interest in their scene more than anything else, but at least there was an air of authenticity around their earlier releases From Beyond (1991) and the Inhuman Condition EP (1996). Well, this air very rapidly turned to smoldering exhaust when they next ventured into a studio to release what must be the most abusive and abysmal contract filler feces slinging in all Earache history. Having not cared much for the band to begin with, I never would have thunk I could ever be 'disappointed' with a Massacre record, but Promise is such trite shit that it is anomalous, and throughout this entire project of re-exploring Florida's death, it is hands down the worst studio album.

Let's be clear: the only element you can trace from this to the debut album is the fact that Kam Lee and Rick Rozz are returning to their respective roles of vocals and guitar. Correction, Kam Lee is PURPORTEDLY present on this album. He has claimed in interviews that he never finished the vocals, quit during post-production, and was not involved in the final product. Otherwise, it's an entirely different sound, pedestrian groove metal delivered with minimum effort. Say what you will about bands like Pantera and Biohazard, they at least put considerable work into their releases, where Promise has the musical merit of a hurried trip to a public restroom. Each of its nine originals evokes some pathetic guitar riff well below the talents of Rozz and the new rhythm section, and at best you're going to get a curvy, whacked out lead (i.e. "Unnameable") amidst the effluvia of this creative sewage. Meanwhile, Kam Lee (or whoever this is) grunts above this sluggish mess, hymns of woe related to what must be the most pathetic topic imaginable. You see, Promise is essentially a concept album about getting dumped or betrayed by a woman. I confirm it's a woman because one of the tracks ("Where Dwells Sadness") contains a hypothetical conversation between the vocalist (referred to as 'Kam' at about :26 into the track) and some proxy succubus. It's like a Stabbing Westward record, only that band at least had a small handful of hooks in their favor. Massacre does not...

How do get from Inhuman Condition to this album? And what's worse, why in the world would Earache ever have released it? I'm not necessarily opposed to change if it benefits a band, molds them into something more memorable than a previous incarnation would have yielded. But this is beyond pathetic. The lyrics suck like the angered musings of a 12 year old hesher spurned for the 6th grade school dance. Whether this inherent bitterness was authentic or not, it conjures no appreciable imagery aside from the cussing out of the 'bitch' through primitive prose of loss and betrayal. For fuck's sake, Britney Spears songs are more substantial. But set against a backdrop of such vapid, bouncing bullshit riffs, their irritable nature becomes somehow compounded. I am forced to reconsider that this album was nothing more than a joke. There is simply no means by which rational musicians could take it seriously. The problem is that it's not funny. Not even the cover of Concrete Blonde's "Bloodletting", which might have been interesting in some other context, but here stands as some uninspired Type O Negative interpretation.

Shame, shame, SHAME on everyone involved with this abomination.