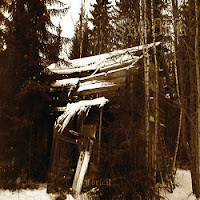 Jon Bäcklund is a Swedish musician who performs with a number of other outfits, namely Eldrit and as an additional guitarist in Svarti Loghin. His solo entity, Srodek bears a similar expansiveness to that latter act, but where their sophomore Drifting Through the Void missed the mark completely for my ears, Förfall is a breathtaking balance of tortured black rasped vocals and catchy, uplifting rhythms molted out of fuzzy chords and thinner, clean guitars laden in golden reverb. The formula is repetitious and incredibly simple, yet the fine choice in notation alone is what propels this from being another lamentable exercise in spacious boredom to something well worth the time of anyone who fancies a hybrid of dreamy shoegazer rock and dire melancholy.

Apart from the sorrow-borne strings and feedback of the album's intro and outro, there are five tracks, most of which follow a similar path into wondrous, bright and wintry obscurity. All hover around 5-7 minutes in length, and what they lack for in variation or deviation from their central composition, they make up for in effect. There have been a number of attempts at 'warmth' or spring and summer seasonal aesthetics in black metal, some failing outright (Woods of Ypres) and some succeeding with room to spare (Mortualia's second album gave me this impression), yet Förfall functions in either climb. You could just as well appreciate this while confined within the walls of some snowy, abandoned cabin (i.e. the cover image) or watching leaves drift by on a late summer stream. Tracks like "Bleak", "Ödestad", and "Vågtjärns Svarta Vatten" are transient, eloquent, desperate and scathing simultaneously, and even the more bluesy dirge of "Rotboskogens Djup" carves out an emotional iconography in the listener.

Were an album like Förfall to linger on into oblivion, it would very quickly lose its luster, but 'Nekrofucker' Bäcklund keeps the experience under tight reins (about 37 minutes) that are perfectly tuned to an autumn walk beneath a suicide skyline, each hymn an eerily positive ode to despair with drifting bass lines and earthen guitar tones. I found the album to serve as a delightful medium between the rustic rantings of LIK and the eccentricities of earlier, Pulver-era Lifelover with more steadied vocals, and it's easily recommended to any who enjoy the minimalist contours of the nature inspired, post-Burzum methodology, even if there is deceptively so little to it.