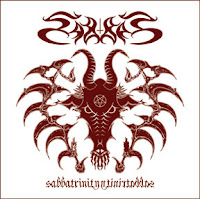 It's hard to believe that Japan's Sabbat have not put out a new, original full-length album in eight years, but instead they've kept themselves busy with dozens of live efforts, splits and EPs through obscure imprints; most of which seem to instantly become collector's relics by means of their scarcity. However, seeing that they're one of the best metal bands in the world, I feel that Gezol and crew deserve our patience. As they prove with Sabbatrinity, it really pays off for us in the end, because this is yet another rush of truly senile black, thrash, speed and traditional heavy metal aesthetics with more charisma than any ten other hand-picked nostalgia addict bands.

The production here is perfect for the band's intentions, but it is by no means modern, so expect the same repressed live feeling you've felt with their past albums. Delicious, delirious, well written proto-black evil is rampant in riff-fests like "Black Metal Scythe" and "Total Destruction", the interaction between Gezol's distorted bass lines and the leads of Damiazell prove that the band can easily survive the loss of long time guitarist Temis Osmond. Sabbat truly strips everything down the basics, writing songs that sounds as if they've escaped straight out of the 80s and early 90s, rather than 'trying to sound' that way. "Witchflight", "Witch Hammers", and "Ravens Tell" are all great fun, but I felt that the truly standout tracks were "Northern Satanism" with its bristling, infernal energies and grave-borne, ghast-spun vocals; and "Root of Ultimate Evil" with its choppy thrashing and mix of Gezo's ghoulish and higher pitched presence. "Witch's Torches" is another exciter, with a thick, workmanlike rhythm section that drags you straight back to Slayer's Hell Awaits or Show No Mercy, with an added trace of Venom. The album's closer, an instrumental called "Witch's Weed", is breathtaking, as its guitar leads rip along over the ominous pipe organs, evoking the campy occult horror that the band is so endeared and loyal to.

Sabbatrinity sounds old. Old and dark. Like a friend that has been away on a long voyage, come back from the mist of obfuscation to once again share a fire and a few tales with you. Blessed (or cursed) by the authenticity that so few bands can muster when they've run out of ideas and simply photocopy the muse of those past. And that's because they are old, going on 27 years of existence without once changing their direction to suit the flashy trends that have come and gone. If you're into any of this legends' past material, or really any of the early wave of black metal influences (Venom, Mercyful Fate, Bathory, Bulldozer, Piledriver, etc.) then you already know what to expect. This is the real deal, so spill your purses. throw your goddamn horns and elbow the nearest poseur as hard as possible. It's not necessarily perfect, but then, neither are you.