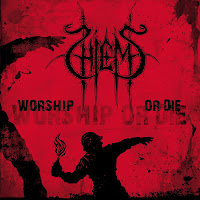 I'm not sure exactly how much despair a single soul should bear upon his/her shoulders, but the multi-instrumentalist Algol of Italy has certainly taken it upon himself to find out. He's worked with other bands (bass in Forgotten Tomb, some vocals for the French outfit Dead?), but Hiems is perhaps his primary focus, a project which eschews the expected, super raw buzzing and rasping of the suicidal, depressive black sub-genre to endow his compositions with a thick broth of guitars, serpent spat lyrics and dense atmosphere that is conjured by the layering of the rhythm section. Worship or Die might only be the second full-length manifestation of the band, but it does wear the weight of 12-13 years of vision.

The album starts with this grim, almost subdued intro of dark synthesizers, morbid pitched vocals and gently battered tribal percussion which definitely builds the expectations, and then delivers upon them with a juicy, dire riff that cuts through the band's immense, ominous tone. Unfortunately, "I" seems to blow its wad within the first minute, its solid guitars lapsing into some pretty standard black metal patterns as the blast beat enters. Others fare better, like the grooving of "Scum Destroyer" which might appeal to the fan of Hellhammer or perhaps even the more recent Satyricon fare. I enjoyed the balance of the the swaggering guitars and light traces of faintly audible ambiance hung over their precipice. "W.O.F." is threaded with dissonant Nordic hooks and battering drums, where "Bringer of Light" is more spacious and haunting around the central, slowly thrashing rhythms. There is also the namesake "Hiems", nearly 11 minutes of swerving hooks and thick bass.

I definitely enjoyed the heavy, sagging tone of this album, which brings one to a dark place sans the abysmal production values that distinguish so many acts in this particular sub-genre. But as is the issue with so many black metal albums in the past decade, and despite their thick, effective layering, the actual guitar riffs do very little to inspire. The vocals are steady but predictable, bloodied but ineffectual, and I found that it only the atmosphere itself that held me at all. A few of the patterns are well written, the vile lyrics sufficient to the task, but I was always left craving just a bit more to be wrought from the compositions. In the end, despite solid pacing and some level of variation, Worship or Die does not plant its tendrils in the memory so much as it distances itself from the more common, dry and trebly works that populate the genre.