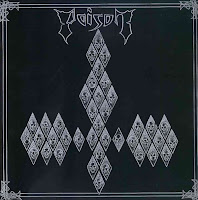 Poison was one of the most volatile and potent forces in the thrash underground of Germany, but various misfortunes caused them to suffer a severe case of the 'underachiever'. The band had a wealth of demos around circa 1984, but it wasn't until 1993 that a full length album was posthumously released. Into the Abyss is basically an 'official' re-issue of the band's 1987 demo, and what a fucking demo that was. Put on your kvlt vnderoos, folks, because this was a band who could manifest hellfire with the best of them. Think old Sodom, Slayer and Destruction with brutal guttural vocals...well before most bands were using them, and you've got one remarkably underrated force here that could very well have sprung a million patch encrusted denim jackets with the sleeves torn off.

Into the Abyss features but four tracks in 33 minutes, but there is more than enough versatility here to show a band capable of nearly anything. Each is a self-contained saga, 7-10 minutes in length, and visits a number of thematic poles. "Alive (Undead)" opens with a dirge-like clean guitar sequence which summons up 70s doom nostalgia before ripping into an atrocious riff of brash speed mutilation, while the rhythm section lights up like an artillery battery. "Slaves (of the Crucifix)" returns to the doom intro before busting out close to 10 minutes of thrashing, blustering torment that puts most extreme metal of the day to shame. I love the depth here in the slower, lurching bridge. The warlike "Sphinx" and the morbid, obese Lovecraftian nightmare "Yog-Sothoth" will also have you scratching your temples, wondering why you had never heard of or sacrificed any small animals to the sounds of this band in the past.

Sure, this is a glorified demo, and the production standards are as a primitive reel recording, but fuck that, because Poison extract an impressive dark range of tones that overcome any hesitance due to the clipping or hissing in the mix. This was with ease one of the most brutal and evil bands in all of Germany through the 80s, and it's sad that they didn't get the same shot as a Kreator or Sodom, but at least the album has been made available through re-issues. The version I'm reviewing here is not the latest: Iron Pegasus has a later version called Further Down Into the Abyss with from 2006 which incorporates some older demo material in addition to the core tracks. If you're into old Slayer, Bathory, Sodom, Venom, and Possessed, then you absolutely must track this down. If you're not...well, cyanide is always an option.