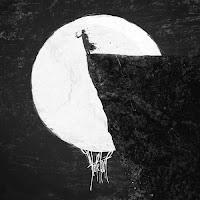 The last release from the French duo Heretoir that I heard was the 2009 EP .Existenz., a dreamy and drifting piece of darkness that wandered the twilight of perdition, but didn't exactly leave the most lasting of impressions. For their s/t full-length debut, they've found an apt home in Northern Silence Productions, and I am satisfied that the band has managed to maintain their root genre (black metal) while incorporating about the same level of shoegazing, post rock aesthetics that characterized the earlier tracks. Heretoir is tortured, hugely atmospheric and depressing with just the faintest trace of hope hidden somewhere in the subtext, and while it's not the most perfect escape imaginable, it's 50 minutes of more than adequate melancholy.

It begins with one of its brief instrumentals, "The Escape - Part I", a beautiful flight of spacious, fulfilling ambiance, thrumming distant bass lines and piano strikes, before the power of "Fatigue" sweeps forward through a simple yet effective, crashing melody. Surprisingly, it's not long before they escalate into a blast beat, and the vocals cycle through the tortured screams reminiscent of Burzum and Weakling to a more soothing balance of cleans. A track like this could go south very quickly if it was swathed in excess repetitious, but the Frenchmen do a superb job at shifting the rhythms back and forth so the listener doesn't develop an edge of ennui, just a spike of sorrow piercing the faintly beating heart. "Retreat to Hibernate" continues to diversify the content, its beautiful clean guitar intro creating 3 minutes of oblique paradise before the electric chords come crashing forward to separate the soul and flesh.

"0" is another quality intro, with swelling guitar feedback and a pair of vocal samples entwined, somehow connecting the drifting apparition of the music back to humanity, and then there is a straight blast into "Weltschmerz", shimmering with disdain and collapse. "Graue Bauten" is sure to get any fan of Lifelover and Alcest in a daze, its thick mournful melody bisected with clean passages, and the same could be said for the 7 minutes of "To Follow the Sun", which is easily the gem on the latter half of this record. The namesake "Heretoir" is another striking piece, about 6 minutes of smooth howling and bled out bliss that pauses for a 'hidden' track of ringing guitars and more of Eklatanz' wandering vocals.

Obviously this is not a band stacked with riffs, their intricacy lies completely in the flow of the minimal presentation and oozing, lush darkness captured by the slight shifts in chords and the varied vocal tones. As such, there can be a moment or so where the attention span does drift away from what's being played out in these moon-bathed gardens of gray, but Heretoir's content is mixed enough in tempo and climate that it maintains an almost consistent hypnosis. It's not as empty and directionless to me as their countrymen Alcest, or the latest from Sweden's Svarti Loghin. There is a tangible if understated structure here that relies far more on core talent than fashionable boredom. Heretoir could be better, but this is an effective album that's already traveled several strides ahead of their prior output.