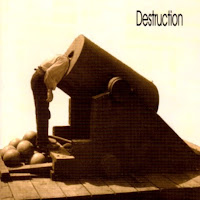 Lowered expectations from their past two releases aside, The Least Successful Human Cannonball is by far the worst album ever released by any of the 'Big Three' German thrash bands, standing forever as the culmination of misery that might have murdered the career of Destruction had Mike and Schmier not decided to give the 80s another go. If you were privy to the previous two releases, you pretty much would have known what to expect here: heavily groove and funk influenced thrash metal with the sadly annoying vocals of Thomas Rosenmerkel. Like the Destruction (1994) and Them Not Me (1995) EPs, it was released by the band themselves, because frankly, what label would want to take a chance on this?

Thrash had already been flogged and keelhauled throughout the 90s, due to a massive dearth in quality among even the better artists. The Least Successful Human Cannonball demonstrates why: outside influences drawn into a central sound with good intentions, but underwhelming execution and bad vocals. Mike Sifringer and Michael Piranio are both constructive riffers, and I would not fault the album for lack of ideas, but the hyper-tense groove rhythms sprung on tightened coils simply don't function under the Destruction brand, which this time out doesn't even brandish the band's classic logo. The band had apparently become aware by this point that milking this formula was not going to get them very far (it hadn't in the three years building up to this album, anyway), so this aesthetic decision seems to mirror the realization that they were a long way from home.

This forcibly forgotten phase of the band did not start well, and it doesn't end well. "Formless, Faceless, Nameless" sounds like Dimebag Darrel riffing with jazzier, swerving guitar lines and pop funk bass breaks, with a lot of 'bounce' to it that betrays the admittedly busy techniques being utilized by the axe men. This motif is continued throughout much of the track list, with songs like "263 Dead Popes" sounding like denser variations on something like the opening riff to "Cowboys from Hell". But worst than the guitars, it's Rosenmerkel's incessant, overbearing rock inflections that really chokes the material down to the trachea. Tracks like the frenetic "God Gifted", which actually has some vintage Sifringer riffing placed in its taut nexus thus end up just as detrimental as tracks like the weak chugger "Brother of Cain", which has the worst chorus in all of the Rosenmerkel years. Seriously, how could you lay that to tape and not have a problem with it?

With Schmier's presence, or even Grieder, some of the riffs in "God Gifted" or "Continental Drift II" might have been saved, but here they seem like pissing against a strong tradewind. But what compounds the tragedy is, aside from the fact that most of the music is forgettable if not outright damning, that the entire band have captured an energetic recording session. It's a busy album, at the heart of which is a trace of the band's bristling thrash energy of the late 80s, and these note patterns weren't written in a day. But they never come together, nor do the lyrics or vocals succeed in anything but aggravation. They're about as effective as that random workout video you found in your media cabinet, which someone gave you as some motivational gift, but you never even watched. Destitute of quality beyond its physical exertions. Detritus for all the wrong reasons. Liquefy every copy of this you encounter. Perhaps time itself might one day forget.