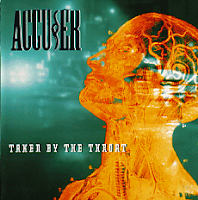 After hitting their career low with 1994's Reflections, one might understand any apprehension to take the band Accu§er so seriously anymore. They had more shots than most bands to get the formula right, cycling through a number of labels, but at their creative apex in the late 80s, they produced just the one decent album of semi tech thrash (Who Dominates Who?) and a few that were merely average. Taken by the Throat, which is likely the Germans' most obscure effort to date, saw the band on their third label in three years, but it's nearly as dumb as its predecessor, a collection of hideously boring groove/thrash metal riffs that Frank Thorns smothers in the excess testosterone of angry, constipated, Panterrible vocals.

Slight bursts of inspiration make for a truly sad listen here, because as you soon as you hear that lead in "Healium", you begin to brighten up. What might this band have been accomplishing if the actual verse riffs were as good as the solo. I mean, it's not the work of virtuosos, but it's fun for a few seconds. "Taken by the Throat" is similar: you get 1-2 decent riffs reminding you of the old Accu§er (circa Repent), and then a wealth of sodden, soon forgotten grooves that any random groove metal band in the 1995 would have been shitting out. Certain tracks like "Fatal Vision" and "Condemnation" develop some atmosphere in their bridge sequences, but then it's back to the same, dull thump of interesting mutes and chords which show almost no thought at all. The closest you'll get to a passable, pure thrash track is probably "The Slug" which has a few machine like harmonics over its pummeling core, and another great lead, but even this is disposable.

I should note that Accu§er themselves were fed up by this point, they'd given it all they could and would fall into a deep slumber until the 21st century, when they'd regroup as Scartribe for a few demos, then decide that they missed their old handle. In 2010, they would finally produce Agitation, their first full-length in 15 years, and while it's nothing to get excited over, it was at least better than what the band were vomiting forth during their 1994-95 phase. Taken by the Throat is slightly preferable to Reflections, but only by a sliver, and by no means should anyone interested in this band's legacy begin their study outside their 1987-1989 material, unless he or she is masochistic.