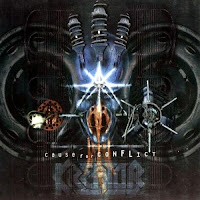 It's interesting that Cause for Conflict arrived during Kreator's 'experimentation' phase, because really this is a pretty straight forward thrash album with a slight, angry hardcore influence that is felt more in the political lyrics than the actual music. The moody 1992 record Renewal was not exactly well met, but that's more the fault of the listeners (including myself, at first) who couldn't adapt to the changes the band were exploring. So to an extent, Cause for Conflict is a step back into safer territory for the Germans, but it unfortunately does not deliver as well as any of the band's prior output, and it stands as one of their least impressive efforts to date, surpassed only by the stab in the dark that was Endorama.

There were a few major changes to the roster, with Christian Geisler coming in on bass (he remains with the band to this day) and Joe Cangelosi of the US band Whiplash having briefly taken over for Ventor or the drums, but I've no idea whether this contributed to Mille's decision to venture back into the angrier thrash territory that was only vaguely available on Renewal. "Prevail" is a solid start, a dark and grooving thrasher with pit stomping guitar rhythms and moments of excellent where a wa-wa guitar sears above a wardrumming backdrop, but the Slayer-like sudden violent thrash propulsion of the bridge doesn't yield as much energy as I would have liked, and the riffs are in general not memorable. Some of the songs like "Catholic Despot", "Crisis of Disorder" and "Hate Inside Your Head" sound like a mix of Terrible Certainty semi-technicality with the dour industrial hardcore of the band's next album, Outcast, but even these are not standouts.

The few flights of worthwhile frenzy are scattered through the track list, including the raging "Bomb Threat", which is an under 2-minute blitz of writhing thrash and Mille barking. Much the same goes for "Dogmatic", with some great riffs that come and go in all too short a time (1:26). "Sculpture of Regret" and "Celestial Deliverance" are both decent, casting a similar shadow to the harder biting tracks of the previous album Renewal. The 12 minute "Isolation" has promise, weaving through grim clean guitars and outright thrashing passages, but it's not all metal: there is a pause and then a noise 'hidden track' at the end of the sequence. Bonus "State Oppression" is hardcore punk, a cover of the cult Italian band Raw Power, and there's not a lot to it aside from its very predictable notation and chorus.

Clearly, Cause for Conflict had the tools to be a better album than this, but for some reason most of the thrash riffs fall flat of what the band were able to accomplish with legendary efforts like Pleasure to Kill, Terrible Certainty and Coma of Souls. I've seen mention that this is one of the band's 'industrial' albums, but that's not exactly the case. Perhaps this aesthetic is found in the politically motivated riffs, or the bleak tone, but there are few if any moments of electronic music here, whereas Outcast or Renewal would directly flavor the aggression with mechanical intent. This is by no means a bad effort, but having at the time just come to grips with appreciating the deceptive Renewal, I felt once again initially underwhelmed. The difference is that the prior album continues to grow upon me and impress through the years, whereas this piece is very easily shoved aside in my thoughts to this day. The lyrics aren't bad (except "Prevail" which is like a collage of the band's prior titles/lyrics), the cover's cool, and the music is just alright (i.e., far below what I expect from Kreator).