Mekong Delta - Pictures at an Exhibition (1996) 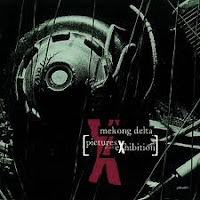 Pictures at an Exhibition is the last Mekong Delta studio full-length of the 90s, after which the band would take a ten year sabbatical, the members exploring other opportunities. Its an homage to Modest Mussorgsky's famous piano suite of the same name, and thus an instrumental album. Doug Lee's tenure ended with Visions Fugitives; though he was still in the lineup at this time, he would not return in the following century. This also represents a culmination in the German band's love for this particular composer, having already covered some of the constituent movements ("The Gnome", "The Hug of Baba Yaga") and another well known Mussorgsky piece, "Night on the Bare Mountain", on prior recordings.

This is not the first such work: Emerson, Lake and Palmer covered the suite with a live album in 1971, and there's also a Japanese proto-electro rendition from the 70s which is quite cool, but I'll give Mekong Delta some credit, because this is perhaps my favorite. Their previous album, Visions Fugitives, featured an original symphonic arrangement of some length (alongside several shorter tracks), so I would have thought the next step to be an entire album of their own compositions, but ultimately I'm quite satisfied with this. The band have included two versions of each track, one with the band performing alone, the other with both band and orchestra, for a total of 32 and 70+ minutes of listening. I'm a bit divided on which I like more...the longer pieces do tend to sound more interesting with just Mekong performing them, but the interludes certainly benefit from the symphony. The orchestral versions certainly seem more enthusiastic, and yet, the core band elements are somewhat smothered in there.

At any rate, this was a fairly risky and ambitious project. Mussorgsky is a fantastic composer, a personal favorite, but I feel like Pictures at an Exhibition is yet another of those classical pieces that few mainstream folks can actually cite by name. Sure, they'll recognize the movements from a number of films, TV commercials or their educational years, but they're unlikely to much care for the nuance of the work being performed by a metal band. Yet, the Germans sound amazing as they graze through the mourning of "Il Vecchio Castello", Hubert's quirky bass-driven "Ballet of the Unhatched Chicks", the frolicking "Limoges: Le Marché (La Grande Nouvelle)" or the famed "Heroic Gate (In the Old Capital of Kiev)". The material is obviously far below the ability level of the Mekong Delta players, but they do it justice, and some of the more flighty pieces do capture the band's schizoid, progressive essence naturally.

Pictures at an Exhibition is pretty good for what it is, the band's seeming finale until the vicious reawakening in 2007's Lurking Fear. If you're interested in metallic reworks of classical music, then it possibly belongs on your shelf alongside other such projects like the sappy Trans-Siberian Orchestra. Sort of how I crave the Minibosses' covers of Metroid and other Nintendo classic themes, I find myself breaking this album out when I'm feeling studious. Granted, it's not quite so worthwhile as breaking out an earlier composer's rendition of the Maurice Ravel arrangement, but then you'd be lacking the thrashing breaks and Ralph Hubert would be lacking your money. I'd also point out that it's far stronger to listen through "The Gnome" or "Baba Yaga" in this context, than independently among the band's original songs. Also: this cover art is the best I've seen from the band.