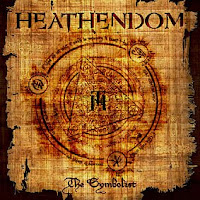 I don't often hold out hope for finding anything new or interesting within the realms of traditional or power metal, but Greek outfit Heathendom presents a sound argument against such obstinacy, with a fusion of old and new aesthetics that takes the listener by complete surprise. Describing their precise sound is complicated, but I'd place it at a nexus between Nevermore, Helstar, Eldritch, Omen and Fates Warning, modernized machinery that is well aware of its roots and explores them with the enthusiasm of dynamic riffs and no fear of deviation from classic tropes where it suits the songwriting. Vocalist Dimitris Koutsouvelis is quite the find, his numerous tones creating a schizoid interface that ranges from dark asylum whisperings to Halford or Warrel Dane-like shrieking.

He's backed by some serious riffing potential, and The Symbolist more often than not creates a vortex of traditional power chords and busier thrash riffing into its philosophical ramblings, not to mention the swelling and theatrical orchestration often used as a gateway into tracks like "Black Euphoria" or "The Symbolist" itself. No two tracks here sound quite the same, and that's to the album's credit, though I did find that some were more hooky than others. "Sanctified" is a highlight, a crawling power morsel evoking traces of Morgana Lefay and Tad Morose, where "The Concept of Reason" truly experiments with its lurching structure, Koutsouvelis shrieking off its heights like a forum of gargoyles debating the nature of mankind. "An Angel, a Demon, and a Dying God" also deserves mention for the excellent bass and leads, and the choir-like crowing vocals that cast the listener into a desperate struggle in which his/her soul seems to lie in the balance.

That said, there are a few tracks which do drag behind the others in terms of their overall impact. "Die Insane" and "Prescience of the End" feature more of the band's slow, methodical plotting dynamics, but they left almost no impression, and also I felt like the initial volley of "Endistancement by the Null Position" was not entirely memorable. Heathendom always seems to hover at the edge of genius, but The Symbolist never seems to take the decisive plunge into its waiting arms. In addition, though their mix of thrash and power here perhaps precludes a strict necessity for climactic chorus parts, they do seem to be lacking through most of the material here. But these traits are easier to forgive when confronted by such an invigorating band, and even if The Symbolist is not their magnum opus, you can be assured that such potential lurks just beneath its skin, so don't be surprised if these Greeks evolve and explode rapidly in the right direction.