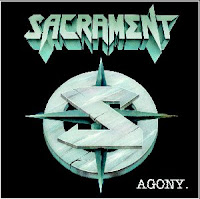 Not to be confused with the US Christian thrashers Sacrament, or a number of other bands with the same name, this was a German group who came along a little late to the game with a straightforward blend of Bay Area styled 80s thrash. Competent but derivative, Agony was the band's debut album, before shifting into a more decidedly power/heavy metal sound in the 21st century. There's not a lot to say for or against this record. It's well produced for its day, with a lot of clean riffs and variation, and the vocals of Alex Wiener, which sound like an unusual cross of GWAR's Oderus Urungus and Grave Digger's Kris Boltendahl, contributing some flair to what are really just average, if solid guitars.

This is one of those cases where you'll be feeling your aural tendrils along and snatch up bits of music that feel familiar. For example, the closer "Seed of Scorn" reminds me of Metallica's "Creeping Death" during the verse riffs, and "Feed the Memory" is reminiscent of Lethal's progressive metal ballad "Another Day" from Programmed, though Wiener has a difficulty distributing his broken English here. I'd chalk it up to coincidence more so than any direct ripping off, but these moments are not alone on Agony. Most of it is simply charging, straight ahead thrash batteries in the vein of Metallica, Testament, Forbidden or Defiance, and to that extent, songs like "Barren Cross", "Scan the Dark Eyes Aglow" or the Jihad based "Maze of Anger" evoke a certain level of rugged authenticity, even if they lack the guitars or chorus to compete with their influences. Often, a bristling guitar melody or clean vocal segue will shine through the thrashing, but these diversions are rare.

Really, Agony might have built a bigger audience for itself had it come out 5-7 years before it did, but the bleachers were abandoned by 1995 for this sort of thrash and it's not hard to reason out why. The band's competence and loyalty simply don't cut it here, and the album falls deep into the abyss of forgotten thrash 'could have beens'. I can give some credit to Sacrament for not taking the cheap way out and writing vapid, shitty groove/nu-metal like so many of their peers were steering towards, but that doesn't ingratiate me to the contents of this debut. This band is apparently still alive and kicking out there, having independently released a more power-oriented album in 2006, but that doesn't seem to have gotten them any further.