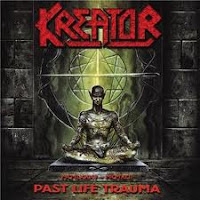 Though Kreator hadn't been an in-house band with Noise Records for several years, they nonetheless found the inspiration to release yet another compilation CD to pad their quickly emptying pockets. It's a fucking shame, truly, both that something like this exists, and that Noise Records doesn't exist, because that was by far the best individual metal label of the 80s, putting out entire swaths of classic material by some of my favorite bands. Alas, it turns out their business practices were not on par with their ear or talent. To be honest, I was quite hopeful when I first saw this, because it has a great cover art and the fact that it was 1985-1992 gave me hope that it would consist largely of demos, outtakes and rare tracks.

But these are few and far between on Past Life Trauma, and 14/18 tracks are a mere recycling of material from the band's first six albums. There are obvious choices made, like "When the Sun Burns Red", "Pleasure to Kill", "Extreme Aggressions", "Terrible Certainty", "Tormentor" and so forth, and they're fairly evenly distributed, but let's get serious: anyone who matters will already have purchased these in their original incarnations, whether that be by cassette, LP or CD, and it's entirely redundant to recommend this to any newcomer. Just head straight for the oldies, kids, there is NOTHING to see here. The 'rare' tracks included are nothing more than some live material from Renewal, which sounds mediocre, a demo of the track "Trauma" which was on the Renewal demo, but obviously deemed too purely thrash for that album, and "After the Attack", a B-side from the Behind the Mirror single off the Terrible Certainty album. This last addition is perhaps the one thing anyone would be interested in, but despite some decent, feral riffing and a mean breakdown, it's easy to tell why this wasn't deemed good enough for the album.

Translation: Do not waste a dime on this.

Past Life Trauma comes hard on the heels of two other compilations, both of which are likewise weak, but offer marginally more of value than this one. Considering that Noise already hammered us with Scenarios of Violence a few years prior, and the 90s sampler Voices of Transgression one year prior, this feels infinitely more like someone applying a rod & reel to your wallet and less about appreciating one of the greatest German bands out there. Noise might have done right by us, perhaps by issuing a cool box set of the old albums, with enhanced artwork, rare/live tracks and demos added to each, and other perks. That would have grabbed the interest of both new and old fans alike. But instead, this is yet another waste of space, with 1-2 rare tracks that might briefly pique the hardcore devotees interest for a matter of minutes before they are consigned to the potty of perdition.