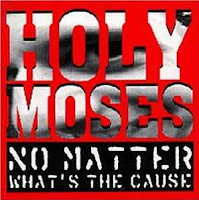 The first time I was exposed to this album, I pondered what had happened to Holy Moses that they had decided to become Sick of It All. Then, when I first heard its battering content, I wondered when Sabina Classen had begun taking testosterone treatments. I mean, the woman always stood among the most brutal of thrash front persons, but this was manlier than fuck. Then it dawned on me that this was not Sabina Classen at all, but Andy Classen performing the vocals, and I did despair. While Sabina was off distracted by her other band Temple of the Absurd, with a number of members of Warpath, Andy was keeping the home fires lit by releasing something that he probably should have...well, at least not under the name of Holy Moses.

Certainly, there are traces of albums like Finished With the Dogs or World Chaos here, but the band's thrashing core has been elasticated into the propulsion of hardcore and grind music. Basically, if you could temper the band's prior output with some Sick of It All and Napalm Death, then the result would sound a whole hell of a lot like No Matter What's the Cause. It's extremely pissed sounding, so it approaches this evolution with some knowledge of what it needs to accomplish, and yet I found myself pretty sick of it within 3-4 tracks. "Step Ahead", "Denial" and "No Solution" all feature Andy's blitz-like, dense guitar tones in a fast, thrashing formula, and Sven Herwig simply gets ballistic with the drums, and Danny Lilker of Nuclear Assault, S.O.D. and so forth guests on the bass; but the character of the band's better years is completely absent, and it probably falls outside the interest range of the standard thrasher who was into their material.

Now, if you always shunned Holy Moses' catalog for being 'not heavy enough' (in other words, you didn't listen to it because it wasn't death metal or grind), then perhaps you could derive some satisfaction from this steady onslaught. Most of the tracks are over in 2 minutes or less, and though he's more monotonous, this Classen's vocals aren't that bad, just a deeper, blunt alternative to his ex-wife. Personally, I find it to be the weakest they've ever released under any formation, and it's not something I'd listen to even if I were a massive fan of what it was trying to pull off. But it was a sour note to leave off on, since it represented 'curtain's for the bands for the next seven years, until an Andy-less, Sabina-fronted Holy Moses would return for the Master of Disaster EP in 2001.

Verdict: Indifference [5/10] (choke on your disrespect)