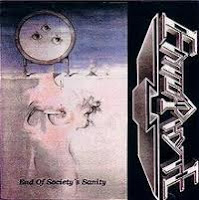 Though named for a parasitic plant, there was nothing quite so parasitic about the obscure Entophyte's sole LP, End of Society's Sanity, which follows largely the wave of highly progressive power and thrash hybridization that was prevalent in the sounds of Toxik, Watchtower, Mekong Delta, Psychotic Waltz, and Realm around the turn of the decade. Comprised mostly of members from demo level thrash bands, there is undoubtedly a wealth of talent on exhibition here, if ultimately no trailblazer of memorable writing. For such a low-key release, the production is actually quite good: the drums are a bit poppy and loud for my tastes, but the guitars sound excellent, as do Harry Kortboyer's nasally transitions from Fates Warning-like sadness to barking aggression, and an occasional death grunt.

The album runs rather short for one of its type, with only 6 tracks and just under 30 minutes of music, but I like to think that the band were just putting their best foot forward and trimming the fat. They do a lot of start/stop technique as they transition through thoughtful, arching mute sequences and frenetic, paranoid speed metal, and perhaps this can give the album somewhat of a disjointed atmosphere, but other bands have made this work (Deathrow, Mekong Delta) and for the most part, so does Entophyte. "End of Society's Sanity", "Rat Race" and especially "Random Victims" all do their part in proving a literacy with their chosen components. "Human Machine World" has some punchy, mechanical riffing as the name might imply, with a current of groove sewn through, and higher pitched, wailed vocals that often feel they're about to turn off key, but that's probably due to the accent. I could have lived without the reggae segment, but at least Kortboyer's bass is on fire there and it gradually becomes more interesting when the lead breaks out.

But it is "The War of Khyr" which is my favorite here, an epic 7 minute flight of power thrash fantasy that has riffing at the level of a Helstar or Realm, often climaxing in some of the most aggressive guitars on the album. The leads deep in the bridge are incredibly effective, twisting towards dementia. The only downside here was Kortboyer, whose voice seems to be breaking up whenever he hits the higher register (the death growls work well though). "A Day Less Than Zero" is also one of the better tracks, again ripping power/thrash with choppy, skilled guitar work cutting through the forward momentum. These two tracks ensure that End of Society's Sanity is worth checking out, no matter how you can lay your paws upon it, if you've an erection for any of the other band's I've name dropped in this review. I can't promise this is the sort of record you'll be listening to on end for eternity, but there are few enough examples of bands treading this terrain that it is worth a shot, despite the shortcomings and duration.