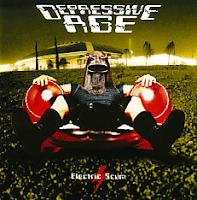 It was never a question that Depressive Age were going to one day jump off the deep end and explore other avenues than metal music, only a question of 'when'. The when was 1996, and the album Electric Scum, their final full-length before reinventing themselves as D-Age and then effectively falling off the face of the Earth. The band had slowly been evolving towards a more accessible format through their 1992-1994 albums, but the proximity of their releases did not yield a massive gulf. First Depression was the most thrash, and Symbols for the Blue Times the most memorable. If we can compliment Electric Scum for anything, it would be that it's their most eclectic offering; one that you'd best avoid unless you want to witness a great band going slowly insane.

Essentially, Depressive Age only maintains a few of its staples here: the mix of aggressive and clean guitars that weave a fusion of Gothic, progressive and light thrash metal. I say 'light' because most of the guitars here, other than the melodies, are incredibly vapid chug fests that serve as nothing more than the bottom end groove for what the vocals and synthesizers are creating above. They're quite unfortunate, because the riffs on earlier albums, while often just as simple, were much stronger. But building a wall of guitars is not really the point of this album, but to create poppy, mesmerizing compositions which strongly feature Jan Lubitzki. I will admit that he turns in his personal best here, but that involves a lot of groovy, almost rapped rhythms that channel an emotional whining bite akin to Jonathan Davis on the more melodic Korn tracks. If you hate those, then you'll probably hurl when you hear this; if not, then you might be on board to experience some of the band's then-futurist impulses.

Of course, the Germans are tight enough and smart enough to write some catchy vocal lines despite the style involved, and where they blend with the synthesizers lovingly in "Cairo Crabat" the wonderful, marginally industrial "Teenage Temples" or the cover of Bronski Beat's "Small Town Boy", you get the impression that a wider audience exposure would have enamored the once prog-thrashers onto the radars of numerous disaffected Gothic pop teens in Europe and beyond. They maintain the poetic, urban exploration that they started through Symbols of the Blue Times here in "Toyland Hills" and "Electric Scum", and they also give a glint of what their next course might have been in the charging industrial rock hymn "Sports Yells" or the brooding, Gothic-inflected "Polar Athletic Son".

It's a fairly major transformation here, one that nearly rivals that of their countrymen Morgoth and their own, more unwelcome and unexpected 1996 deviation Feel Sorry for the Fanatic. A transformation that most would not remain on board with (the band was never all that popular, but this is where their small sect of fans would abandon ship). The songs here are consistent and most are catchy through the first couple listens, but the weak guitars hold them back, and Jan Lubitzki's ravings are not going to appeal beyond those who like Gothic/pop metal acts singing in English, like Pyogenesis or Dreadful Shadows. Electric Scum is worthy of the bubblegum it emanates: smooth and sugary while it lasts, poppy, but leaving a bitter aftertaste that you can't wait to wash out of your mouth. But hey, great cover...

Verdict: Indifference [6.25/10] (telescopes move left to right, uniform and tight)
Posted by autothrall at 8:20 AM