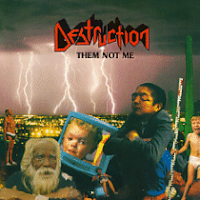 Them Not Me is the second EP of 'Neo-Destruction', which is how we refer to the 1994-1998 chunk of the Germans' discography that Schmier and Mike Sifringer dread to include in any mention of their sordid past. I can understand the sentiment, and as well all know, Schmier has nothing to do with crap, but the fact is that it still exists. Someone thought it was a good idea to make this happen. But all derision aside, this is actually superior to its predecessor, because despite the fact that the music is pretty awful, there's an honest attempt to do something different that would rise to the tide of the 90s. Swerving funk and groove elements hide just below the chaotic, thrashing surface here, but there's quite a lot going on.

Thomas Rosenmerkel was still at the helm here, and his presence is still a huge reason why the mid 90s were utter hell for Destruction. The guy puts too much overbearing emphasis on his gravel chewing, like some hard sleaze rock misfit who was reared on a pacifier of Pantera and Skid Row. Thus, even when the band breaks into something half-way interesting, it is brought low by the laughable performance. By comparison, André Grieder of Poltergeist (who filled in for the Cracked Brain album and tour) sounds fucking incredible. But Rosenmerkel is not the sole guilty party here, but the constantly shifting and strutting of the groove/thrash rhythms that offset the clinical mania that lies at the band's core sound. It's an uneven mesh. At best, it sounds like Cracked Brain with less impressive riffs ("Scratch the Skin", "Bright Side of Leprosy" and the intro to "Push Me Off the Windowsill"). But the pumping, popping bass lines and the majority of the guitars are just all too forgettable in this context.

The final track, "Mentally Handicapped Enterprise", is only too fitting of a title that truly sums up the experience of Them Not Me; but it's also the best song here, with some flippant, fast paced energy that under any other vocalist might sound like merely mediocre modern thrash. I would also like to point out that this is by no means half-assed in execution: the production here is quite clear and punchy, certainly professional by 1995 standards and despite the retrospective embarrassments, it was clear that Mike Sifringer and Oliver Kaiser were trying to accomplish something with this release. They simply chose the wrong vocalist. Without Rosenmerkel's absurd slathering, the very same music might be marginally more effective, but here it stands, for all time, as an exercise in bobbing, weaving, ducking confusion.