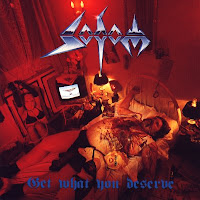 Having renewed their approach to extremity on 1992's Tapping the Vein, Tom Angelripper and company decided not to simply repeat themselves, but explore their tendency towards raucous punk rock to its natural conclusion. The result was Get What You Deserve, a pretty severe splatter/party album which fuses this attitude with the band's metallic fundamentals, for a fairly unique sound that remains entirely Sodom. The bass becomes the central instrumental here, which is unusual despite the 3-piece configuration: Tom has always been an impressive, thick player, but the guitars were there to match his prowess. Here, his distorted lines are the dominant force, after which Tom's death barking, Atomic Steiff's relentless pounding, and Andreas Brings' thin, savage tones splay out in descending order of importance.

Get What You Deserve is rather a mess, but a hot mess reeking of blood, alcohol and semen, like the dire cover image might suggest. Most importantly, it's fucking heavy. Turn this up to an appropriate volume and the bass will rattle your bones and teeth, almost like experiencing it in a live setting. Certain of the tracks rely on pure punk rock aggression, like "Die Stumme Ursel", "Eat Me!", "Fellows in Misery", and "Erwachet", all of which fester in the simplicity of the familiar riffing (Sodom have never written interesting punk tunes, settling with the standard chord progressions) and Tom's omnipotence in the mix. But there are also tunes with a little more bite to them: "Jesus Screamer" is a ripping, hardcore blasphemy; "Delight in Blasphemy", "Gomorrah" and "Into Perdition" rekindle memories of In the Sign of Evil and Obsessed by Cruelty; "Tribute to Moby Dick" is a riot of slow, doomed thrash and whale samples, completely unexpected even if the riffs are bland.

The album is closed with a cover of Venom's legendary "Angel Dust", only too natural in this environment of originals, for that band was likewise influenced by the excess of punk attitude and simple songwriting which Sodom are emulating here. I won't lie and say that Get What You Deserve belongs among the band's more recognized works. Personally, I'm just not a fan of the guitar tones, no matter what sacrifice they are making for the raw swagger of the basslines, and more importantly, I'm not a fan of the guitar writing. It seems almost an afterthought here, and my favorite memories of this German staple all consist of those with strong (Blackfire) axe work. But as a 90 degree diversion from the band's usual course, it's fun enough to just crank the damn thing and ride the overbearing, violent impulses, even when the back of the mind mourns for the lack of a "Sodomy and Lust" or "Agent Orange".