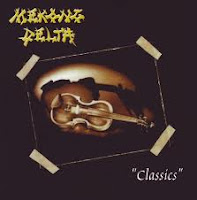 I had a feeling that something like was bound to happen, so it's not at all a surprise that all of Mekong Delta's classical cover tracks from prior albums were compiled and released on their own to flit about the attention spans of the handful of people who might actually be sucker enough to fall for this. Here's the quandary: fans of a highly progressive thrash band like this were bound to be few and far between, bless their tight little souls. Those parties interested were already likely to own the band's full-length albums, where most of these covers (and the few originals) had already appeared in their original contexts. So why the fuck would they require a re-release? This band was not exactly Trans-Siberian Orchestra, packing arenas with well known Christmas standards.

It's kind of like Fight Club, in which Tyler Durden comes up with the plan to sell suctioned fat back to rich women as bars of soap. Well, I was not about to fall for it. About the only positive here is that if you were missing the Toccata single from 1989, that track is included, and the 2nd version of "Interludium". You get the Mussorgsky pieces "The Gnome" (released numerous times before this collection), "The Hut of Baba Yaga" (s/t debut) and "Night on a Bare Mountain" (Dances of Death). From The Principle of Doubt, you got the cover of the brief guitar classic "El Colibri", heavily pregnant with Ralph Hubert's bass, and also the Twilight Zone theme. Also included is the "Interludium" (The Music of Erich Zann), and that's all she wrote. The "Sabre Dance" from Kaleidoscope was excluded since the album was fairly recent, and I'm surprised they didn't include their Black Sabbath medley.

In short, it's a collection of things that most attentive fans of Mekong Delta already owned, all in one place for...convenience? The band's renditions of these classics are not unworthy, mind you, they're all quite spastic and lovingly crafted, if never enough impetus to choose them over the original incarnations. But I don't find that having them all cramped together on one disc in any way heightens the experience over hearing their novelty amidst the band's original thrash tracks. I'll reiterate that there's a slight degree of value for those who were missing The Gnome EP or Toccata single, but otherwise stay far away, or at least pick up the 2006 reissue which includes six more tracks (including the originally missing "Sabre Dance").