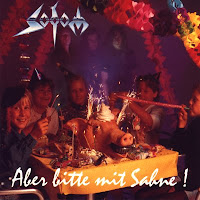 Aber bitte mit Sahne is yet another in a series of Sodom EPs that were released much to the (presumed) jubilance of their fan base, pockets and record label. The centerpiece here is the cover of the title track, a famous hit by the Austrian pop legend Udo Jürgens. It's not really a shock that Sodom choose to put their stamp on such a tune, because Angelripper and his posse have always had a flair for the fun and ironic. Why, he even created an entire side band based on the principle. Well, "Aber bitte mit Sahne" is a pretty dull choice, even with Tom's aggressive vocals slathered all over it, and I enjoyed it little more than the disposable Bryan Adams cover on The Saw is the Law compilation.

But the rest of this EP does not fare much better. You get an 'early warning' of "Sodomized" from the band's Get What You Deserve album, issued the following year. It's a thumping rager with attitude, like most of that full-length, with simple thrash riffing alongside the thickest, most destructive bass tone the band has ever used. "Abuse" is a very punk/hardcore sort of track, under 2 minutes long, with predictable and uninteresting chord progressions, and nothing that holds it together outside of the sheer propulsion that Sodom is playing it. Lastly, there's an update to "Skinned Alive" which is not really necessary, since we just got that song the year before and it was fine where it originated. But I guess they liked it enough to bring it up to the cantankerous, savage thrusting of Get What You Deserve.

The only thing of note is that this was the first recording with Atomic Steiff taking over the drums for Witchhunter. The end of a legacy, for Chris had been with the band since 1981. Steiff is no slouch, having played with Holy Moses, Living Death and Violent Force, so he brings to bear a fresh energy that makes a lot of sense for the next few albums. But it's hardly a reason to acquire this EP. The best songs are available on the surrounding full-lengths, in superior company than the bland Jürgens cover.