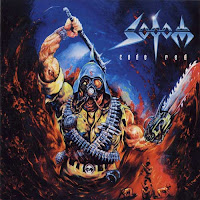 Though 'Til Death to Us Unite took some baby steps towards returning Sodom to the rightful monarchy of German thrash, it was Code Red that would fully blow their punk deviation to smithereens and give us exactly what we wanted: unhinged, devastating war thrash, loaded with the aggression and slick, infectious guitar work the likes of which we really hadn't heard since Tapping the Vein, Agent Orange, or Persecution Mania. I actually credit this to the fact that Tom was able to hold the lineup from the previous album intact; it had been quite awhile and it really shows in the tight execution of the new material, with Bernemann rapidly growing into his position as default axe man until the present, with a slew of riffs that hearken back to the glory days when Frank Blackfire was in the lineup.

Code Red isn't perfect, but there are certain songs here which are damned close, such as "Spiritual Demise" with its excellent mid-paced plotting and waltz of grooving, precision guitars that will strain the neck of any non-poseur to the brink of vertebral collapse; and a nice fast break in there which serves as nothing more than to highlight just how good its verses and bridge are. "The Vice of Killing" is like a "War Ensemble" for Sodom, axes charging as if the business of war were about to be joined by a squadron of professional threat assessors and eliminators. But probably my favorite track on the entire album would be "The Wolf & The Lamb", in which Bernemann creates these lightning fast, cascading patterns that collide incredibly with the thick tone and echoed vocals of Angelripper. "Code Red" itself is another of the strongest tracks, but it sounds quite familiar to their previous hits "Agent Orange" and "Nuclear Winter", so it doesn't possess that same surprise as the others.

Otherwise, the tracks are just average to good Sodom fare that's about the same quality as Tapping the Vein. "What Hell Can Create" is sure to thrill fans of the band's more extreme material, while "Addicted to Abstinence" is thankfully the closest the band get to the punkish thrash they'd be engaged in for the past 6-7 years. There aren't any particularly weak tracks to be had here, though "Visual Buggery", "Tombstone" and "Book Burning" get a little lost in the shuffle. Regardless, the mix of this disc is about as pro as the band would find in their career, with the guitars thick and juicy like a human steak lying medium rare on the field of war, the bass delivered with sufficient bombast without going overboard (as on Get What You Deserve), and battering ram drums and vocals. It's kind of exactly what I look for in a Sodom record, even though a good half of the tracks are not exactly memorable. Worth owning if you enjoy the band, however, and I'd easily place "The Wolf & The Lamb" and "Spiritual Demise" on any career playlist.