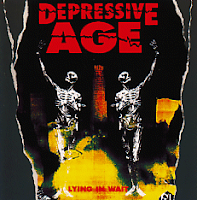 First Depression was a truly exciting prospect, the antithesis of the malaise that was devouring the thrash-flesh in a decade of confusion and diversification. Depressive Age was its mad author, a band that were not only engaging, but intelligent, and all without abandoning the principles that drew metal fans to the genre like maggots to carrion. Lying in Wait was the follow-up, and while it's only barely more to look at than its predecessor, it is the inner eye that would be reaping in its color, because this is simply one of the best sounding albums of 1993, laden in reach, clear tones that define every note audibly, every crash and strike.

It's not exactly complex music, but where Depressive Age might lack in the cerebral, spastic proficiency of a Mekong Delta, they make up for with an accessibility and solid riffing. Jan Lubitzki's vocals require a little bit of getting used to; his accent creates a wavering effect, but he certainly can hit the notes with all the nonchalance required of him alongside the ghostlike, melodic chugging of "Lying In Wait" and "Where". The albums gets denser through the chord-walls and increasingly savage guitars of "Way Out", but even here the band weaves in clean, friendly guitar segments into the heavier plugging. Of special note are the creepy anthem "Berlin", the beautiful descent of "The Story (Autumn Times II)" in its dreary guitar lines, and the rambling elevation of "Hateful of Pride" which shifts through a glinting acoustic intro to bursts of measured aggression.

Personally, I found the album a mark or two less fetching than the debut, because I naturally preferred the busier guitar sections there. But also, the vocals fit the music a little tighter. He's using the same voice on both efforts, but I feel he's given so much space here that his more brooding tones can be a minor distraction (and will turn off some listeners completely). That said, this album is successful at shifting thrash metal into a new terrain, where it thrives at one end of a pendulum's arc, the other being the myriad moments of tranquility that stir the emotions. The Germans still represented a bright spark for the future, taking their time to manufacture tracks that were not insulting to what had come before them, but complimentary. The lyrics are great and the Harris Johns mix is far cleaner than what his audience might have been used to through his other metal works. Lying in Wait is not a masterpiece, not even close, but I'll take it over the over saturation of crappy groove/thrash hybrids that spawned throughout the 90s in vain attempts to become the next Korn or Pantera rock stars.