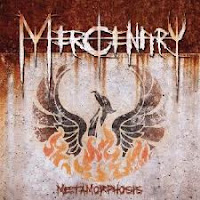 When you look at the course of Mercenary's career up to this point, it was inevitable that they were veering towards the creation of the consummate pop melodeath record, and with Metamorphosis, their 6th full-length, I feel that the moment has finally arrived. They have cemented their position as the Danish Killswitch Engage, with a roster of songs that I might have mistaken for Justin Bieber or Fallout Boy had the guitars not been so heavy, or René Pedersen's voice been far more powerful. Yes, this is an album that marries the Swedish influenced melodic death/thrash guitars with crystal clear vocals, rasped Tomas Lindberg outbreaks, hardcore death grunts, flighty synthesizers and the most modern, polished production values one could wish for (or fear) in the entire metal world.

Have you run away yet? If not, you're probably resolute that this is another Mercenary record. It's not a whole lot different than its predecessor Architect of Lies, an album I enjoyed, but it takes the pop readiness to a level I'm not totally comfortable with. It's just cleaner. Spiffier. A metrosexual metal album, through and through. It has cover art that looks like a bad tattoo, and a new logo which at the very least is superior to that generic font they'd been using for years. But it's not entirely void of value and intensity if you enjoyed its predecessor, in particular the song "On the Edge of Sanity" which features some sleek, thundering guitar riffs beneath the swirl of the keyboards, and a pretty sweet breakdown, if you're not opposed to having them in your melodic death pop. A few other tracks have their moments: "Velvet Lies" is Romantic and morose, "In Bloodred Shades" pounds along with drippy diligence, and "In a River of Madness" comes the closest to the Swedish/At the Gates-influences at the root of this group.

I've certainly appreciated a few albums of this type before, namely Architect of Lies and the last album from another Danish band, Raunchy (Wasteland Discoteque) which was comparable, but in the end I wasn't feeling Metamorphosis all that much. The material here is precise, the riffs reasonably plotted, and René has a pretty impressive voice that could have served him in a non-metal career, but I feel that the band's commercial flourishes have just taken them into a space I don't care to follow, where chugging breakdowns, pianos and bubblegum reign hand in hand. For what it is, it's pretty well done, and but apart from 2-3 of the more raging songs I don't see myself ever having the inspiration to listen through it anymore. But if you're a steadfast follower of the more pop-inclined efforts from Dark Tranquillity, In Flames and Soilwork, like Stabbing the Drama, you might find something to it.