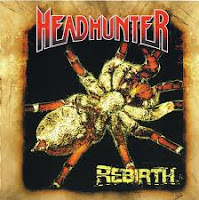 Marcel Schirmer, better known as Schmier, will always be known as the consummate, charismatic thrash front man, and a damn solid bass player, but I feel like his greatest contribution to metal music has been his eternal vigil as a stickler for quality. With the possible exception of his appearance in Bassinvaders, I don't think he's been a part of a single album that was less than good. Perhaps the post- Antichrist catalog of Destruction has felt like more of the same thing being recycled, but all of those works are still worth hearing to the thrash fan. His other, lesser known band Headhunter is even more consistent, having never released a full-length that was anything but great, and so, despite another lackluster, lazy cover image, the third effort, Rebirth, is yet another measure of quality.

While other bands, veteran and youngblood alike, were busy fellating the foul nu-groove waves that were erupting out of the States, the Headhunter trio were continuing to sharpen their mesh of power-infused thrash metal, and Rebirth sees a refinement in production and songwriting that slightly trumps its predecessor, A Bizarre Gardening Incident. Schmier turns in another superb vocal performance, stretching his unmistakable venom to the heights of the previous albums and beyond, and there is less of the 'fooling around' that threatened but failed to steer the sophomore album off the tracks. Jörg Michael is, as usual, the ready go-to drummer, but Uwe Hoffmann deserves special mention once more for his excellent riffing, transforming each track into a work of depth that sticks to the imagination more than even Destruction were able to do on several works of their prime years.

Rebirth is superbly written and well-paced, and once the flagrant "Auf Geht's" intro has passed, it is straight to business with the grooving metallic shuffle of "Armies of the Blind", a track that grows even more impressive the deeper it gets, with a chorus/bridge that will blow your fucking head clear down the tracks to the last station. "Warhead" is slower, surefooted, with Schmier's bass lines dancing a deadly waltz below the dire chugging and vibrant majesty of Schmuddel's crisp tone. Nothings lets up: "Unhuman World" positively gleams with incredulous riffing; "Are We Mindless" is a great power metal rush with a balladry to its intro; the deceptive "Disco" intro is broken down into the driving of "Scares"; "Adrenaline" and "Struck" are nothing less than glorious heavy metal.

The only exception to the rule here is the cover of Little Feat's "Don't Bogart That Joint", which seems half-baked and retarded, if you'll pardon the pun. It's not that Headhunter have lacked for a sense of humor in the past, but this was never really a good song to begin with, with its dull if peppy bluesy pallor, and it doesn't fare any better in these capable German fingers. Their version of "Rama Lama Ding Dong" from the last album was far better. But gladly, the band just threw this one onto the end of the album, so it's not like it stands as some obstacle to your enjoyment of the originals, and other than that, and some of the cheesier lyrics, Rebirth is pretty spotless, hovering close in value to the band's enormously underrated and overlooked debut, Parody of Life.