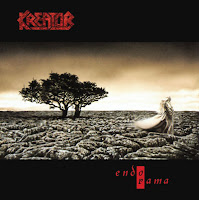 St. Anger. Cold Lake. The Least Successful Human Cannonball. Risk. Diabolus in Musica. Almost all thrash metal artists of note, with extensive careers, have a black mark against them. At least one. So it says a lot for Kreator that their black mark is really not all that bad in the grand scheme of things. Not to say that this is an album worth hearing, but of all the band's 90s experimental fare, it is Endorama which deviates the furthest from the band's incredible evolution of the 80s. It is Endorama which is the 'least' thrash of anything the band would record, and yet there is still a trace of that aggression where it's needed in these compositions. Complicated this album isn't, but essentially Mille Petrozza flossing his emotional muse across the far sharper bite of the past.

Endorama places Kreator in an accessible, Gothic metal context with simple chugging guitar riffs, droves of melodies and overt rock-influenced verse chorus structures. The writing is a lot slower than one would even be accustomed to from Renewal or Outcast, but those albums do certainly hint at what's to be found here, with their minor industrial tweaks that have here been translated into subtle synthesizers. It's definitely an interesting listen, but I feel that of all their efforts, this is the one that might have better fared if branded a Mille Petrozza 'solo' album or some other project. It seems largely a waste of the talents of several of its players, in particular Tommy Vetterli of Coroner who stayed on for this, but also the rhythm section of Reil and Giesler. The mix is clean but subdued, and to tell the truth there are a few chorus elements of note here, but it's an entire different ballgame than the band's legendary beasts Coma of Souls and Terrible Certainty.

First, I'd point out the good. "Golden Age" is the opener, with a verse structure reminiscent of Megadeth's "Symphony of Destruction"; simple chugging well executed below the narrative vocal tone, erupting in a barked, but melodic chorus. Even better is "Shadowland" for its sunny but sad melodies, with some grooving outbreaks in the bridge, and a great lead which utilizes Vetterli at his strength, fluid and precise shredding. As much as it pushes the 'Gothic' on this disc to its maximum, I also rather enjoyed "Passage to Babylon", which might as well be the product of some other German band like Crematory, Dreadful Shadows or Lacrimosa (in fact, Tilo Wolff guests on this album). "Soul Eraser" produces walls of bristling harmonics and is perhaps the most thrashing, aggressive on the album, but I don't exactly love the chorus, and there are a few more pieces like "Willing Spirit" that carry the flame of "Golden Age" and "Shadowland", creating a similar effect of sweeping sunset that is married very well to the cover image. The title track, "Endorama" is half-decent, but basically feels like "Golden Age II" with a guitar line that is eerily reminiscent of Sisters of Mercy's "Temple of Love".

Outside of this, though, there's not a lot of glaring promise on this album. Some of the softer tracks like "Everlasting Flame" and the "Chosen Few" are all too forgettable, despite their uplifting atmosphere and lilting emotions. "Future King" and "Pandemonium" each have one good riff, and the latter even packs an Artillery-like punch in the verse guitar, but I just can't stand the vocal breaks, which seem too corny coming from Mille. "Tyranny" is just altogether bland, since we'd already heard the same formula executed a few times already, and it feels like something Pyogenesis might have written during their Unpop and beyond phase. Also, in general, I've found that through the years I simply never even feel the urge to visit this album, even its stronger tracks, whereas Renewal really grew on me, and Outcast has 2-3 tracks that I am often compelled to hear, despite their hardcore embellishments. Endorama might have become some lost classic, some anomaly, had its content been superior to this, but it was not and never will be strong enough.

Obviously those who could not give two shits about this German mainstay outside of their 80s period will want to stay far and wide of this album, even if they're overcoming their obstinacy to explore the band's evolution. But at least some credit must be given that Kreator, so far from home, are stilling being guided by something of a voice. You could probably share this album with your girlfriend, or your grandmother, and they might find a few of the tracks catchy, despite Petrozza's tendency back towards his barking vitriol. And the metallic components have not been abandoned, merely molded into some cross-genre tinkering. The reaction to Endorama was not one of hell and brimstone being breathed upon the band, but understandably it was not a good one, so the follow-up: Violent Revolution would steer the band back on its thrashing course, though not entirely devoid of this album's melodic charms. I would probably rank this below Cause for Conflict as the band's least impressive full-length, but unlike so many other career missteps, it's not completely deserving of anyone's chagrin.