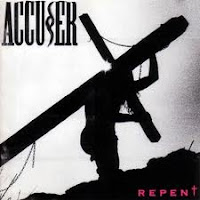 Beyond the severely lacking Double Talk, belabored with foolishness, I was not expecting much out of Accu§er for the foreseeable future. Thus, when the band changed their logo for the fourth full-length Repent, the cross-bearer adorning its cover image, I was horrified that I was about to experience some major change for the worse, like perhaps a transition into proto-groove or nu-metal, which was then in its inception. Thankfully, that's just not the case for Repent, and it's actually a better effort than most that the band have released: meaty, honest thrash metal with thick bass-lines and simple but appropriate chugging brutality that was very easily the heaviest of their efforts to date, if not the best.

A lot of the riffs reek of Metallica's ...And Justice for All, if it was super charged and splattered with deeper, more aggressive vocals. Speaking of which, Eberhard Weyel had left the band at this point, so Frank Thorns took over those duties, and this explains the positive shift and the ballsy power being leveled behind "Rotting from Within", "Repent", and "Get Saved". The guitars have a lot of punch and impact to them, hitting straight for the gut, while not abandoning the slight spurts of clinical technicality that were present on the last few albums. These are not necessarily timeless classics that will be forming nostalgia in your mind that prompts immediate re-visitations, but they're not bad, and when the band branches out to the acoustic intro of "Sacrifice Machine" or the slower plodding of "The Drones", it's only to refill the listener's attention span for the further propulsion of "Nosferatu" or "Judgement Gone Blind".

They close this album with a cover of Die Krupps' "Metal Machine Music", and though the vocals render it a little cheesy, it's still an interesting choice, and loyal enough to the original. I just don't care for a few of the boring, chugged riffs there. The guitar tone is also pretty blocky throughout the entire album, and while this gives it a primal force, it also seems to drain the potential ballistic savagery. This is not a good album. It's not the equal of Who Dominates Who?, their best overall. There's really nothing here I would specifically seek out, but my head did bang to a few of the rhythms, and I liked the new logo. For the most part, Repent is a passable facelift for the band. It's tight, it's pissed off enough to stand toe to toe with a lot of the emerging groove metal tough guys of the 90s, but it doesn't abandon the whole central notion of 'thrash'. The band would go down that drain soon enough...