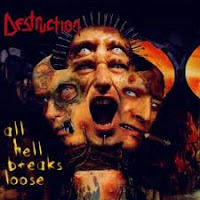 With 'Neo-Destruction' flushing itself down the proverbial toilet with each new manifestation of groove and Thomas Rosenmerkel that infested the 90s, and the superb Headhunter being criminally overlooked by the metal realm at large, it was only too reasonable that Mike Sifringer and Schmier rejoin forces for a new century of the manic, biting thrash metal that carved their names in stone to begin with. All Hell Breaks Loose brings the band back to its original three-piece setup, with a new drummer Sven Vormann to complete the power trio. Complementing their rebirth, the band decided to record this at Abyss Studios, which was quite hot at the time (and still is), and they've even got Peter Tägtgren guesting on the "Total Desaster 2000" remake.

Turns out, the production choice was a wise one, because by far the strongest component of this comeback is its mix. Thick, fibrous guitar riffing brings out just about every note you could ask for. It's honestly a little loud here (they get the balance better on The Antichrist), but the evolution of studio sound would only benefit the German thrashers. Long gone is the fuzz of the Sentence of Death era and the confusing density of Release from Agony. Schmier's vocals still 'have it', thanks to a decade of kicking ass with his side band, but they're not quite so diverse, with only the occasional scream to top off the mid ranged anger. However, this really suits Destruction well, and always did, so you really don't feel as if you're missing out if you were one of the few enamored of Headhunter. The rhythm section is dynamic and frankly, brutal, with Schmier playing anchorman to Mike's rightful turn at the throne, and Vormann adapting well to the veterans' chemistry.

As for the songs themselves, most are incredibly solid, but there are very few that stand out long to memory. All Hell Breaks Loose is certainly the best thing Destruction had released since their superb live album Live Without Sense about 11-12 years prior, but it's not their most immortal in terms of songwriting. The intro is beautiful, with sparkling and eerie clean guitars, and the first few tracks "The Final Curtain" and "Machinery of Lies" herald the reunion with fits of thick, crushing anger and down to earth lyrics, but despite their frantic elevation they don't entirely pay off. "Tears of Blood" is better realized, with a mix of mid-paced and driving sections, some great Schmier screaming and melodies spliced in, and other positive evocations include "World Domination of Pain" and "The Butcher Strikes Back", the latter of which is the expected self-referential tribute, but not the 'ultimate' execution of this idea (that would come on the next album).

But outside of these 5 tracks, I can't say that I am totally feeling the album. It seems to drop off in thrust and quality the deeper in you go, with some dull grooves inhabiting "Extreme Measures" and "Visual Prostitution", the weakest here, but still possessing a few exciting hooks. I don't exactly love "Kingdom of Damnation" either, and the title track is a mixed bag. Also, while it's cool to have one remake here, "Total Desaster" doesn't really carry the same charm as the earlier incarnations, perhaps due to its excess sense of familiarity. Though it certainly can claim its peaks among the valleys, All Hell Breaks Loose is ultimately judged due to its proximity to The Antichrist, which is hands down one of the best thrash metal albums I've heard in my lifetime, and that can only dull the effect of this in retrospect. What we have here is an elaborate setup for a band to truly rediscover their muse and explode.