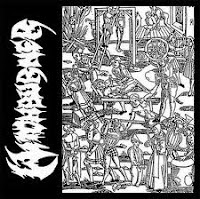 1996 might today seem like it was too early for bands to begin to wax nostalgic for sounds that perished only 5-6 years prior, but there was an explosion of black/thrash and death/thrash hybrids starting to take form, especially in Scandinavian countries. Witchburner was a German entry to this field, a band which sought nothing other than a chance to revisit their beloved influences (Kreator and Sodom in particular) with a slew of reasonably balanced tunes. You could certainly consider them a 'black/thrash' entry, though in reality this was what a band like Kreator were playing in the first place, with vocals more wretched and rasping than most contemporary thrash acts from both Europe and the states.

There's also a definitely streak of traditional NWOBHM inspiration running through this s/t debut. Once "Possessed by Hellfire" blazes its brief trail of perdition, little more than a Pleasure to Kill hopeful, without the raw explosion of grit and power, you run smack into the cautious clean guitars and Priest-like melodies of "Hammer of Destruction". However, these segments are in the minority, as much of Witchburner is comprised of simple, ballistic thrash without a trace of originality. "Darkness", "Hyrdocianic" and "Killed by Future" are all competent, but they seem like re-inventions of familiar properties by their German forebears. Some of the band's breakdown riffs (as in "Killed by Future") are plainly mediocre, and their speedier rhythms ("Fight to Be the Winner") forge less interesting patterns of notation than Destruction and Sodom, with "Witchburner" resting on the punk-driven laurels of the latter.

This all being said, Witchburner is not at all a bad listen. There's nothing catchy or special about any individual track, but on the whole it has this morbid, authentic feeling that would probably satisfy fans of the massive crop of bands that are performing like this nowadays. For fuck's sake, there are entire record label rosters in the 21st century which are stocked only with bands that delve into the nostalgia of early extreme metal. Witchburner do not impress here more than Swedish acts like Bewitched, Maze of Torment and the like, but I don't imagine anyone into the late 80s German black/thrash pioneers would frown too much listening to this.