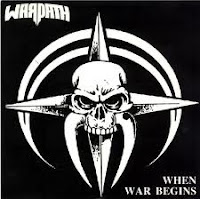 Warpath was another of the West Virginia Records family of bands who took a more blunt and US approach to thrash metal than their esteemed German forebears. You could very easily compare their sound to Despised, Howlin' Mad or Holy Moses for its simplicity of intent and average pacing. The difference is that Warpath had a tremendously professional sound to them, the equal of almost any other band out there from either side of the pond. They also had one of those monikers that probably a hundred other bands were striving for. Warpath. How can you not like it? Unfortunately, the Germans never really did much with the name, and their career consisted of four average to low quality albums that never went anywhere.

When War Begins is the first of these, and probably the best. The material written for this is blunt, honest, and direct, and the band wastes no time in fucking around. They just roll out the tank-like, bludgeoning riffs in "Resistance Useless", "Absolution", "The Ballad of H" and the dull plodding mosh of "Hypocrite". Punchy, taut distortion and simple, grooving drums abound, and rarely does the band build upon speed or conjure much interesting. "Those Crawling Insects" is the song I probably liked the most, but the semi-curious melodic muted riff in the intro does not sadly represent much of the track. There are also a lot of spacious, morose pieces like "Die in Grief" or the epic attempt, "Last Vacation" that also devolve into some standard thrash that recalls Sacred Reich. The vocals throughout the album actually sound a good deal like Cronos from Venom: angry, dour barking, and in fact Cronos guests on their cover of "Black Metal", with Sabina Classen...

Yes, that's the same "Black Metal" which appears on the useless Holy Moses compilation Too Drunk to Fuck, and it suffers from the too many pilots at one helm syndrome. But the problems here begin long before that, as the album is simply unable to build any level of interest through 10-11 tracks. Like a few of the other West Virginia-signed bands that I listed above, they are pretty much the definition of minimal effort. The guitars seem like they took almost no time to compose, merely variations on pre-existing material that stretched back to 1986-87. It's similar to the underwhelming Holy Moses debut, Queen of Siam, though I don't like the vocals as much as Sabina's even on a bad day. In short, it lacks the effective explosiveness of a good thrash album that makes you want to tear up pavement or throw your cubicle's furniture through the nearest glass window.