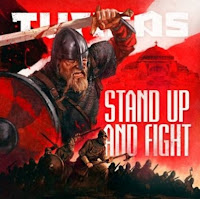 To put it bluntly, Finland's Turisas has no place in the collection of anyone unwilling to appreciate 'epic cheese' in their metal. Devout, nerdy and glorious simultaneously, few bands are so able to make a listener crack a smile as he/she reminisces of his/her last battle in some fantastic or historical war simulator. Even the image of the band is ridiculous, going at great lengths to appear more viably battle scarred and hardened than the next. But you know what? I've come to enjoy their sound, if only because of that rare place it takes me, to realms of nearly Romanticized majesty and manliness that simply do not exist in the current spectrum of humanity. So if you've ever found yourself smitten with the sounds of Equilibrium, Thyrfing, Bal-Sagoth and Manowar, then the Finns are a natural curiosity. If not, then stay well clear of this album.

Battle Metal and The Varangian Way were both great fun in their time, but I feel like Stand Up and Fight is better at meshing together the more authentic symphonic elements with their simplified power/folk metal discourse. "The March of the Varangian Guard" is an impressive opener, with manly choirs and orchestration that escalates into theatrical glory, the perfect melodrama to accompany some bad big screen epic. But "Take the Day!" takes it to a whole other level, like something you might hear in a Rocky film, or Starblazers. The bass, horns and strings swell up to an instant climax, the head nodding in rhythm to the straight rock guitars before 'Warlord' begins his deep, Gothic intonation. "Hunting Pirates" and "Venetoi!" Prasinoi!" stir the content into other directions, the former a raucous maritime roast and the latter an enthusiast splice of opera and charging war metal. But my favorites come later, in the dreamy hearth-stoking sweeps of "End of an Empire" and the calm, narrative closing of "The Bosphorus Freezes Over."

If you snag the limited edition, you get a bonus disc with some worthwhile acoustic renditions and a pair of covers. Jethro Tull's "Broadsword" is a natural in the hands of Turisas, and had it not already been written decades ago, would probably feel like one of the band's own original compositions. In other words, they do a great job with it, and I enjoy it almost as much as the content of the core album. Black Sabbath's "Supernaut" is also given an acceptable treatment, obviously asserting the band's 'epic' qualities over the original version, and once again tasking the listener with an acceptance of the Finns' tongue in cheek bombast. And that really sums it up for Stand Up and Fight, a finely wrought piece of fun that will offer no shelter to those who deign to take it too seriously. It's sleeker and more polished than either of the band's prior full-lengths, and yet I cannot say that I enjoyed it at that level, but if I need a surefire fix of swaggering, ale swigging battle orchestration to soothe my dorked up mind, then Turisas has yet again provided a reliable vessel upon which to sail, and miraculously managed not to insult anyone's intelligence. Lighten up and fight.