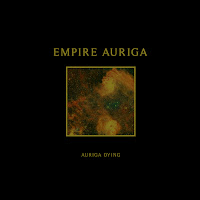 Empire Auriga is yet another example in how black metal is being triumphantly bridged into external mediums of sound, or rather; how the core, lo-fi aesthetics of the genre are adapted to a spacious, martial industrial landscape. If you could picture a middle ground between Triarii and Summoning, then you will be well prepared for the sounds of this Michigan outfit. Bleak repetition, banks of distorted guitars, a mix of rasped and chanted vocals, and monolithic industrial drum programming that feels like a labyrinth of gears and pipes churning out the repressed ambitions of a generations lost to the vastness of civilization and space.

There is a variation of intensity through several of the tracks. Where "Time Expanded" provides but a steady march through sirens, resonant raw guitar tones and distant horns, the more extensive "Sorrowsong" cycles from cavernous electronic noises to massive swelters of sad guitar melodies and oppressive vocals that are barely audible as they hiss against the infernal clanking of the percussion. "Dreaming of Breath and Stars" is a dour anthem for the downtrodden, with more of the mystical, distant guitars ringing off against the central tumult of despair; while shorter tracks like "The Lurker" writhe with the dissonance of speech samples, or the walls of guitar ambiance that characterize "Soul Interrupt". But perhaps my favorite track on the entire effort is the closer, "Dust and Ether", which is a simple, escalating dark ambient track that escalates through a central pier of dense noise, harried by light synths and distant howls and samples.

As interesting as I found Empire Auriga's atmosphere, I do feel like the material is not quite so hypnotic as I might have hoped. Certainly it's interesting, intelligent and has a firm grasp of its minimal nature, but there was a fraction more monotony than I desired, and where groups like Svarte Keiner, Karjalan Sissit, or Megaptera complete suck me into their compositions, I felt a few moments where I was looking at my watch, wondering if something more interesting would occur. This isn't the case so much for the longer pieces ("Dust and Ether", "Sorrowsong") but for those in between, which don't seem to bear the same massive vision. That said, this is only the first recording, and the fundamentals for something enormous are being laid here that might one day thrill fans of the visceral, dark black/ambient and industrial suggestion of obscure artists like I Shalt Become, etc. which are simply more revelatory at this point.