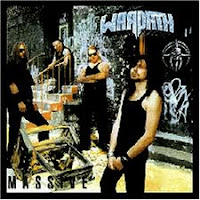 When War Begins... was not exactly a flagship of potential. Sure, it was a tidy record with very solid production and clean tones that gave the guitars a lot of punch, but the writing was all to mediocre at a time when a thrash band really needed to stand out to survive. Well, somehow Warpath got picked up by Steamhammer records, but their sophomore Massive follows in the same precise footsteps, with perhaps a little more edge to the Cronos-styled vocals. Like Holy Moses, the vocals would have fit right at home on an early death or death/thrash metal effort, but here they're served over a slew of primal and pedestrian riffs and thick, oozing bass that feels again like artillery slowly rolling out to battle, so slow that it misses all the action...

"Massive" itself is especially vapid. You know you've run out of ideas when you're writing lyrics about the actual act of how you write lyrics, and this seems to cover that subject, lumbering along with some huge, dumb grooves. It's unfortunate, because I wouldn't mind Dicker's vocals so much over better music, but they're just wasted on this. A couple of other, bass-sloshed thrash tracks like "Ambivalence" and "Race War" attempt a higher volley of energy, but the riffs are just terrible, rarely played on more than 2-3 chords or mutes that better bands would toss as being wholly uninteresting. Songs like "Save Me from the Wreckage" and "Fears of the Past" do nothing more than the basic Sacred Reich style plodding, only much worse. Once in awhile, the thick wall of rhythm will collide with Dicker in an effective force (the bridge of "Fears of the Past"), but then all momentum is lost when the guitars surge into the dumbest riffs imaginable.

Pick up a guitar and play the bottom four frets, then mute them, then re-arrange the patterns and try again. Thus is the compositional component of a Warpath album, and it's incredibly uninspiring. For once, you just want the band to start ripping shit up, like Sodom or Kreator, but this never factors into their Massive plans. I could accept this for just one album, but two in a row? There's almost no variation from the debut whatsoever, and if anything, this functions in even smaller parameters, since the drawn out mood pieces of When War Begins... seem superior to what few traces are found on this disc. Massive plugs along at about the same pace as when you're bench pressing, with the same blood pumping, weary monotony.