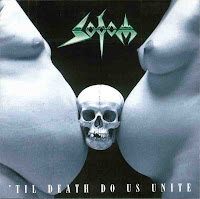 Sodom's 8th full-length, 'Til Death Do Us Unite arrived with a very interesting cover touting the entire birth/death cycle in an image both profane and provocative. Far different than the vivid warfare and gore we'd expect. As for the music, it's largely a welcome return to the thrash metal of years gone, with a few punk tunes that are thankfully more catchy than bombastic, more fluid than forgettable. The band had acquired yet ANOTHER guitar player here, parting ways with Dirk Strahlimeier. Bernd Kost had played on the sole Crows album, The Dying Race, which was great, and he seems a good fit here, bringing the band back fully into the balance of bass and guitar (where the previous albums favored the former at the expense of the latter). What's more, Kost was here to stay! That is correct, Bernd has remained in the lineup until the present time. Well over a decade...a clear record for Sodom.

There are a few stinkers on this album, which preclude it from ranking among the band's best, but there are also a number of excellent tracks that are almost worthy as career highlights. "Suicidal Justice" and "Sow the Seeds of Discord" are both bristling thrashes with a slight proximity to Megadeth classics "Holy Wars" and "Hangar 18" respectively (but solely in the primary guitar motifs), and both among the most exciting and intense the band had produced in about 5 years. "Hanging Judge" is sheer, ballistic speed/thrash with simple riffing, great loud bass tone; "Master of Disguise" following suit; and "Wander in the Valley" has this massive, desolate atmosphere worthy of the lyrics. The cover of Paul Simon's "Hazy Shade of Winter" is also pretty fun, at least more interesting than their closer to the belt covers from the metal field, and among the punk fare, "Polytoximaniac", "Gisela" and "Hey, Hey, Hey Rock'n Roll Star" do not disappoint with their brighter riffs, good lead hooks and gang shouts.

There are, however, a few slower cuts that I found pretty boring, including the title track. It has a nice atmosphere created through the feedback, but the riffs are incredibly pedestrian and I just wish it weren't here. I also don't care for most of the guitars and almost rapped out lyrics in "That's What an Unknown Killer Diarized", though the lyrics are pretty interesting. "Frozen Screams" and "Fuck the Police" are both very energized tracks to bang out the album's opening moments, but neither is really that interesting in the long run. But at least they're played with violent and vicious thrashing. With 'Til Death Do Us Unite, I got the impression that, while still incorporating some of the band's 'fun' mentality, Tom Angelripper had finally decided to consign those elements to his Onkel Tom side band, and thank the stars: the two albums following this one return to pure war-obsessed thrashing.