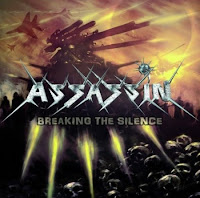 Hard to believe that it's been 25 years since this German thrash act released their cult classic debut The Upcoming Terror, a good if not great first outing that was cast in the mold of bands like Sodom and Destruction, with a slight tendency towards traditional metal. Since that time, though, the band have been relatively quiet. Their 2nd effort Interstellar Experience was less appealing, and the band went silent for almost two decades before releasing their incredibly weak comeback, The Club. Whereas peers like the German Big Three had all re-established themselves as renewed forces in the 21st century, this band merely flopped on its side like a fish out of water. It is thus with great pleasure and relief that Breaking the Silence is incredibly energetic and refreshing, the best they've written since 1986.

The sounds are not exactly the same as that Golden decade, but surprisingly they've kept their core trio of songwriters together, joined by a younger rhythm section. Robert Gonnella is just as focused and angry as he was in his youth, and in my opinion this is his best showing to date. The riffing of Scholli and Micha is blazing lightning, furious and not afraid to take a few risks, like the impressive tremolo wa-wa that heralds the title track and opener. It's probably the single most impressive song here: flurried, tight and progressive, especially the speed riffing in the verse. But the band does not let up there, thrashing you through urban obliteration pieces like "Raise in the Dark" and "Turf War", each a splatter of efficient velocity broken by staggering, accessible but not lamentable grooves. For slower material, there's the pounding, atmospheric "Destroy the State", but everything else is more of a swift kick to the ass, a mesh of Sodom, Destruction, Exodus and Holy Terror styled riffing and crisp precision.

Perhaps the only real blunder is the closer, the punk-driven "I Like Cola", but Assassin are no strangers to fucking around ("Junk Food" from Interstellar Experience would have words with you. Also, I don't care so much for the songs the band have included from The Club, namely "No Fear" and "Real Friends". They're not awful, but not invested in the same quality as the newer material. Breaking the Silence was also recorded with Harris Johns, so if you, like me, are a fan of his older works in the 80s, including a good number of classics, then you'll probably be happy that he's still able to manage the mixing board for a proper thrasher. It's got the same, dry but snappy feeling as many of his older productions. Now, granted, this album is no Enemy of God, Sodom or The Antichrist, but it's a well executed return to form, and there are at least two great songs in "Breaking the Silence" and "Destroy the State". Legendary fare this might not be. But I, for one, am very happy to have bands like Assassin and Wicca back in proper working order.