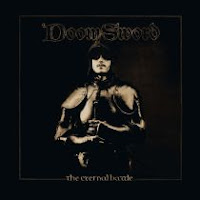 Italians Doomsword have never been one to disappoint their audience, and you can tell this by the amount of time they spend carefully concocting each new album, at least over the course of the 21st century. Four years between Let Battle Commence and My Name Will Live On, and another four years to produce The Eternal Battle, which turns out to be not only another fine offering, but the very best the band has yet manifest on this Earth. More than this, the band offer us something so rare, a brand of traditional and epic heavy/doom that brings out the best of Manilla Road, Brocas Hell, Cirith Ungol, old Omen and Manowar. Read through those names again. Yeah, shove that up your Sonata Arctica-choked flower pipe and smoke it long and hard.

The Eternal Battle is enormously well conceived, and as usual the band visits their lyrics upon historical and mythological concepts, as well as classic fantasy literature like the works of Robert E. Howard and Michael Moorcock's Elric saga. Morose, elegant and crushing, Doomsword are masters of their craft, shifting tempos and vocal arrangements with ease, weaving the lyrics and rhythms into a narrative that paints a black, dour ancestral Earth where men were made Men by their deeds and blades. Deathmaster has a phenomenal voice, somewhere between Eric Adams, Mark Shelton and J.D. Kimball, and he's one of the few out there doing this, and the rhythm section delivers a pummeling, classic foundation without hesitation. But special dues should be given here to Alessio Berlaffa, whose playing runs the range from thick, resonant chords to the intricate leads and muted picking discourse more prevalent in modern, anthemic European power metal.

That's a lot of weapons, and all of them are sharp or blunt as necessary to fit each composition, beginning with the mindblowing "Varusschlacht", which sings of sunken glory through the whispered, dark narrative and the 'whoa oh oh' that marches gallantly into the verse. "Eternal Battle" eschews some of the shadowy atmosphere for the glint of glorious melodies, but it's just as dire and potent, and "Wrath of the Gods" is just balls out fucking heavy metal plugged with soothing, powerful vocals carried over the lamentations of the verse guitars. There is not a track here that will fail to eclipse your soul if given the breath and patience, but I slightly fancy the weighted blades of "Soldier of Fortune" and "The Fulminant" for the heft of the riffing and the massive atmosphere conjured through the interplay of drums and vocals, not to mention those leads in the latter and how they gracefully transition to the river-like bridge.

The Eternal Battle is glazed in a rich but earthen production much like their prior efforts, and it's the perfect needle through which to thread such beloved and forgotten tales. It's nothing pretty, nothing fancy and nothing exorbitantly digitized to drain the listener's connection to the songs of olde, and thus it suits the Italians like a chain mail coif. I'd feel pretty confident in advising you to go out and buy everything this band has ever recorded, but let's be honest, they'll most appeal to a certain subset of metal fans who worship the pre-thrash Manilla Road, or like myself, spin Battle Cry, Warning of Danger, Battle Hymns and Sign of the Hammer repeatedly and wonder where all the magic got off to. There is certainly a doom component, but more for fans of Gods Tower, Northwinds or Pagan Altar than the Swedish crush or the post-Sabbath sludge craze. Doomsword deliver, and this 5th full-length is a proud scar to wear, a bloodied nose from a steel gauntlet you will not soon forget.