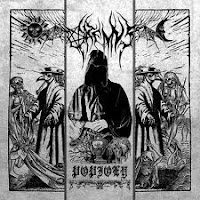 Poland's Oremus is but a recent conflagration, formed just last year by two members of Blaze of Perdition, who have a slightly longer shelf life. However, if the quality of Popioły ('Ashes') is any indicator, then this it not like to be the last time we are confronted by their mockeries. Packaged impressively in a digipak of intricate imagery, blacks and grays, through Total Holocaust / Adverse Order, they mange to perfectly conjure a rare classicism and blasphemous surreality that is well equipped to open the mind for their black ministrations like a spike of martyr's blood being staked directly into the front of your forehead. Bright tones and spacious compositions highlight the Polish lyrics, the ravings of vocalist 'S.' as he both rasps and narrates the listener from a pulpit of shifting darkness.

With but four tracks and a length of 35 minutes, Oremus have been careful here not to bite off anything they cannot chew in their blood-clenched jaws. Naturally, the compositions run on the longer side, but they carry their weight very well. It's refreshing that the band has chosen to use Ingmar Bergman's classic, silent film The Seventh Seal as the central concept, and "The Seventh Seal" itself is the nearly 12 minute opener, a trial of peaks and valleys that snares the listener through its cautious plotting and deceptive simplicity. Oremus do not necessarily play outside of the ordinary, but they place a great emphasis on the guitar lines, which stride over the lowly curve of the bass like fallen angels carpet bombing purgatory. "Tyrana Grób (Grave of the Tyrant)" and the title track are shorter, but nearly as beautiful in their evocation of the film's black and white exterior; while the finale, "Białe Oblicza (White Faces)" takes a stance as the most savage offering on exhibition, but has a fine, vaulted chanting section late in the bridge.

With superb production standards and gorgeous artwork, the Poles are very quick to catch the attention, but what I enjoyed is the superfluous sense of domain and dire beauty that permeates the album. Most Polish black metal is unswervingly ferocious, dominated by the prowess of the human machine providing the blast beats, but Oremus breaks away from this mold by offering breaths of cold contentment and apocalyptic awnings. Like a lot of orthodox black metal, Popioły is hardly woven with catchy melodic hooks, but it presents an overall atmosphere that was a pleasure to partake of, despite the traditional aesthetics that course through the material. If you've not yet had your fill of the misanthropic longing that defines this genre, then Popioły should prove an echo chamber of emptiness and excellence, desperate humours that you can soak in as you stretch out your own meaningless being.