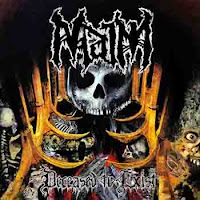 Those who had a chance to hear Maim's 2009 debut From the Tomb to the Womb will likely have been impressed by the band's simple but effective trapping of the classic Swedish death metal tone and atmosphere, like a fly in amber. Granted, there are hundreds of bands barking up the same tree, all in libation to the gods of the late 80s and early 90s, but there is something to this unit's simplicity that distinguishes them alongside other hopefuls like Bastard Priest or Tormented. Deceased to Exist, the sophomore, once again issued through the promising Soulseller Records, sees the band continue this journey, by asserting not only their core, local sound, but a slew of other influences that mold it into a crushing experience.

Most importantly, they can write, and nowhere is this more obvious than the opener to the album, "Gravedigger Sacrifice", which shifts from a forward, thrusting velocity to damp breaks of writhing, thrashing pestilence, above which Rikard's howling grunts serve as a clarion to the grotesque, a call to the rising of the dead. "Morbid Desecration" is what happens when you take the slower pace of classic Death (circa Leprosy) and collide it into a sweeping, monolithic groove circa Hellhammer. "Crematory" is pure atmospheric death/doom, crushing and beautiful as its lamenting melodies cascade subtly over the sparse, bludgeoning chords. Makes me wonder how good this band might be if they went strictly in that direction, yet the variety here is a strength unto itself. Later strong points on the album include the d-beat grinding of "Nuclear Funeral", "Screams of the Mutilated", and "Resurrected from Hell", which more directly mirror their influence from the usual suspects: Entombed, Dismember, Grave, and so forth.

But any critique of this album would be meaningless without pointing out the amazing mix. The sound here is immense, one of those rare albums that can sound old and new at the same time. The compositions are implicitly simple, so great effort has been placed in making them sound as effective and bludgeoning as possible. Yet there is a morbid grace at work, enabling the album to balance its few, black-pitched moments of tranquility (i.e. "Crematory"), which is worthy of a fine doom offering. On the whole, I enjoyed Deceased to Exist more than its predecessor, which plied a slightly narrower path. If there is any such thing as possible 'maturation' in retrospective Swedish death metal, Maim have undergone the process here. I can't promise that all the sounds you're hearing are remotely unique, but for what it is, the material is well written enough to sink its hooks into you and drag you back to familiar sepulchers yet again.