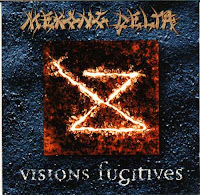 Mekong Delta had tried their hand many times prior to Visions Fugitives at incorporating classical music into their dynamo of schizophrenic, cerebral thrash metal, but this was normally manifest through the covers of various composers like Mussorgsky, unusual when many of the band's peers were covering rock, punk or pop pieces. With this, their sixth album, they actually go ahead and create a 21+ minute symphonic centerpiece, which could be seen as the ultimate manifestation of their desires, and a practice they will more or less continue through later albums like Pictures at an Exhibition or Wanderer on the Edge of Time.

My reaction to this "Suite for Group and Orchestra" is mixed, but its certainly a curious journey. The "Preludium" creates a glorious, brooding atmosphere through synthesizers and lightly muted guitars, almost like a Mekong Delta theme for 'Godzilla'. The "Allegro" component seeks to elevate this into faster, symphonic metal frenzy, and "Dance" becomes the peak, with a brief and beautiful, pure orchestra that shifts into a climactic dirge. That said, I wasn't so much into the "Fugue" fragment, or the closing classical guitar sequence "Postludium", so the experience as a whole feels lopsided in quality. Thankfully, the band have included some new vocal originals, with Doug Lee reprising his role: "Them" and "Imagination" are easily the measure of anything found on Kaleidoscope, the latter featuring some daft bass work from Ralph Hubert. "The Healer" is gentler on the conscience, a graceful waltz of pulsing bass and melodic lines, while "Days of Sorrow" offers up a swirling bridge, but not much else of note.

As a work of curiosity, Visions Fugitives is successful, even though one gets the impression that Mekong Delta might have been better served by letting loose and performing an even broader original classic composition, featuring vocals, choirs, and whatever else they could find, including their kitchen sinks. Even though the separate thrash tracks comprise most of the better minutes of the album, I feel like their very presence detracts from the experiment. This is not unusual, of course, and even progressive metal stalwarts like Dream Theater have used a format like this with one massive, self-indulgent composition and some shorter fare, but I feel like the flow of this particular LP is crippled by the shifts of intent. Thus, while I prefer it slightly to Kaleidoscope, this should not be counted among Mekong's better works.