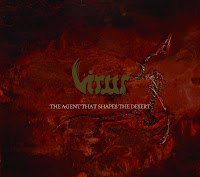 While he's performed short stints with some of the most popular acts in all of Norse black metal, it is the more obscure Ved Buens Ende and Virus that will define the contributions of Carl-Michael Eide and Einhar Sjurso to the musical realm, and distend their legacy unto both eternity and oblivion. The Agent That Shapes the Desert is the third Virus album, honing in on the promise of The Black Flux, and it's hypnotic straight from the opening passages of the title track. Polished, progressive, and supremely psychedelic without ever needing to puncture an artery or send sublime smoke into the lungs of its listener, it speaks of a swerving, curving post-metal paradise that I feel very fortunate to have experienced.

The plot is not so thick as you might think. Virus accomplishes this medium with streams of dissonant, eerie guitar work that is adjoined to the incredible, fluid bass, which in itself would be trance-inducing due to its harried complexity and the deceptively dour, monotonous vocals of Eide. Where The Black Flux was largely successful at this formula, The Agent That Shapes the Desert almost never fails. It's less shining, perhaps. Less polar. But it wrests the listener from his or her perch in the wings of its alien dreaming and then drifts across the vast, empty expanse of the composers' thoughts. "Chromium Sun" and "Dead Cities of Syria" are simply astounding in their blissful bending of environment, waltzes of controlled ardor giving voice to the dry and delightful poetry of the lyrics. "Parched Rapids" another example of perfection with its thumping bass and the incandescent symmetry of its jangling, jarring guitar passages; whereas "Call of the Tuskers" creates an indie rock asylum for the paranoid post-rocking entrepreneur.

If Voivod had written a sequel to Nothingface while tripping on cactus juice in some plot of endless red sands and twisted Snake's genitalia until he had become some lurid baritone, it might sound like The Agent That Shapes the Desert. This is one of those bands and albums which openly mocks simple categorization, and yet it's appeasing; more accessible than either of their prior efforts, and one that I simply have not been able to stop listening to. The lyrics are intense, and despite their novelty, the compositions are incredibly focused. Outside of the band's own scripture, there is just nothing quite like it, and I do hope more will take the opportunity to experience both the shimmering, mirage-like highs and the muted hues of its lows. The gauntlet of the avant-garde has been thrown for the year 2011. Who dares to pick it up?