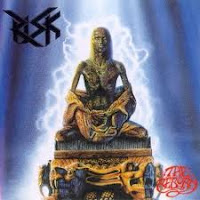 The Reborn is only too fitting a title for the fourth Risk full-length, because it marks a huge transformation in sound and production values that stood far above the first three. They've gone for an all out, apocalyptic concept album here, and even a cursory listen will reveal that the band have emerged from some chrysalis and taken on a more refined, matured mesh of power and thrash metal which has some slight similarities to late 90s Rage, only more polished. This album is smooth as a baby's arse, as clean as a freshly forged plastic, and the band experiment far beyond their earlier years, using male choirs, far Eastern melodies and dire, thoughtful lyrics that you just weren't going to find on a speed metal record with a hippo mascot.

That isn't to say it's necessarily an improvement in all categories, because in the end, The Reborn is slightly less appealing than something like The Daily Horror News, which was really fun and catchy. At times, this is simply too mellow of an effort. But I laud the band for at least trying to reinvent themselves without caving in to the alt.pressures of the 90s, and surviving the exodus of long time axe slinger Thilo Hermann with grace and style. The sitar-laden weaving of "Arise/Last Warning" transports the listener into this brooding, ancient East, and it provides the centerpiece for the album, 10 minutes of escape into the band's fantastic vision of the end times. But after this, there's a lot of variation in both tempo and quality, from the slower, tranquil plodding of "Be No More" with its downtrodden, clean vocals, to the excellent, epic sway of "Lullaby" which reminds me of something Rage might have done with their Lingua Mortis orchestra.

"The Night Will Fall", "Turn Back to Ecstasy" and "Armageddon (Fight Back)" are all fine slices of power/thrash metal, with Heinz Mikus taking on an almost modern Biff Byford-like melody to his vocals, and "No One Will Remember" is an effective closure to the album, glistening with sadness and acoustic guitars that escalate into some beautiful melodies in the bridge. In the end, though, there's just not enough charm and character here to count it among their best work. The creativity applied here was remarkable, and the professionalism obvious, but few of the songs scream to the listener 'repeat at will'. I can sit through it, enjoy it, and then forget about it all too easily, aside from the airs of bleak mysticism and maturity. But it's good enough to be heard, and I would certainly recommend it to fans of the later Rage concept albums, Running Wild, Grave Digger and perhaps Saxon's later, power-infused works like Metalhead and Killing Ground.