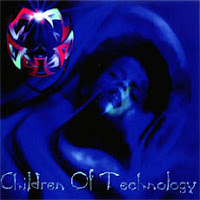 After 1996's long overdue debut Tranquility, and due to an ailing 90s thrash scene, I was not expecting to hear anything further from Wotan, being an immeasurably obscure act to begin with. Thus it is impressive that the band was able to grind forwards and surpass itself with a sophomore album. Children of Technology doesn't break the formula of the previous album, and to be honest the riffs are not that much more memorable, but it's certainly better produced, more aggressive and tighter, almost to the point of infectious late 80s German tech-thrash, with brutal vocals that sound reminiscent of King Fowley of Deceased.

It opens with a caustic maneuver, "W.O.T.A.N.", the band's acronym namesake ("World of Terror and Nausea"), and this immediately raises expectations beyond the debut with its onslaught of jerking, technical guitars, aggressive to the point that it verges on what some tech/death bands were pushing at the time. Most of the other tracks follow this formula, with "Survive" and "Insanity" serving as highlights of explosive dynamics even if they lack durable, ear-catching notations. However, things get pretty interesting with the band's Sisters of Mercy cover, "Temple of Love" which serves as a strange centerpiece. The song is played fairly straight to the original, the primary difference found in Pusche's vocals and the increased palm muting, but it's not all that bad, even when the ethereal female vocals kick in. Another German band, Crematory, would later do a more steady, distinct rendition of the track, but this is sort of curious for a thrash album, and I enjoyed it.

Otherwise, the album continues along with a few forgettable pieces like the instrumental "Magnum-Song", which ironically features a sprinkling of the better riffs on the album and would have greatly benefited from vocals. "Squash Your Jerry" is brief, spastic thrash/grinding and nothing more than a footnote to the more structured compositions on the first half of the disc. Children of Technology sounds pretty good, with thick guitar tones and better vocals than they were able to muster on their debut. It doesn't sound like a band even remotely aware of the abyssal corner into which they were writing themselves. That's a compliment. Solid, enthusiastic and violent thrash metal here, authentic and reasonably well written, but just not enough to get the band any attention, or stand out long in the listener's thoughts. It's the band's last album, before being resigned to infinite obscurity, but if you're a fan of German thrash or perhaps even Deceased albums like Fearless Undead Machines or The Blueprints for Madness, you might want to at least check this out.