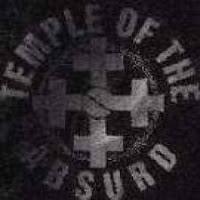 The relationship between Holy Moses and the bands Warpath and Despised had been obvious for a few years. All shared the same sense of mediocrity in the early to mid-90s. So I'm not exactly shocked that Sabina Classen would take a brief respite from Holy Moses and put together something with a few of the members of those acts. I'm just shocked that, despite its attempts to be different from the roster's alma maters, it turned out so bloody dull. The reason being that Absurd is about 60% plodding Warpath thrash in the vein of their first two albums, and 40% an attempt to branch out into moody balladry or crass psychedelia, with Sabina balancing her disgusting brutal thrash vocals and some shaky, accented cleans.

The album begins with a terrible track, so that doesn't help. "Get the Power" is baleful, wholly generic thrash chugging with Classen's torn throat doing all of the heavy lifting, but when it segues into the depressing, clean guitars and her morbid narrative, it feels even more sloppy. This is by and large the worst track here, but Absurd just doesn't recover. At best you get some thrash riffs at the level of The New Machine of Liechtenstein or World Chaos, sprinkled with acoustic guitars ("The Mirror"), bluesy groove metal ("Darker Than Hate"), spikes of melodic and atmospheric leads ("Release") or almost doom-like thrash ("Plain of Existence", the best track on the album). There are a few moments scattered around Absurd which hint at some cool collaboration, but it mostly just drags the less savory elements of the members' previous bands into a new mush of disinterest.

The album's closing ballad/title track ends with a pause and then some 'hidden' interview with an American fan of Holy Moses/Temple of the Absurd, which doesn't make any sense at all. It's not really funny, and it's not even all that self-indulgent. But what makes even less sense to me is the band itself. Why bother to go out of your way to start a new project which reflects only the least impressive elements of your prior engagements? It's an 'absurd' proposition, and one that bears no fruit. Temple of the Absurd barks up a similar tree to the American band Crisis, but where Karyn Crisis' eerie, dynamic vocals and her band's backing music created this strange, claustrophobic brand of memorable quasi-hardcore/thrash, Temple of the Absurd seems flat out boring, relying on a few glints of deviation and atmosphere to carry the sodden weight of its mediocre thrash riffs. Avoid.